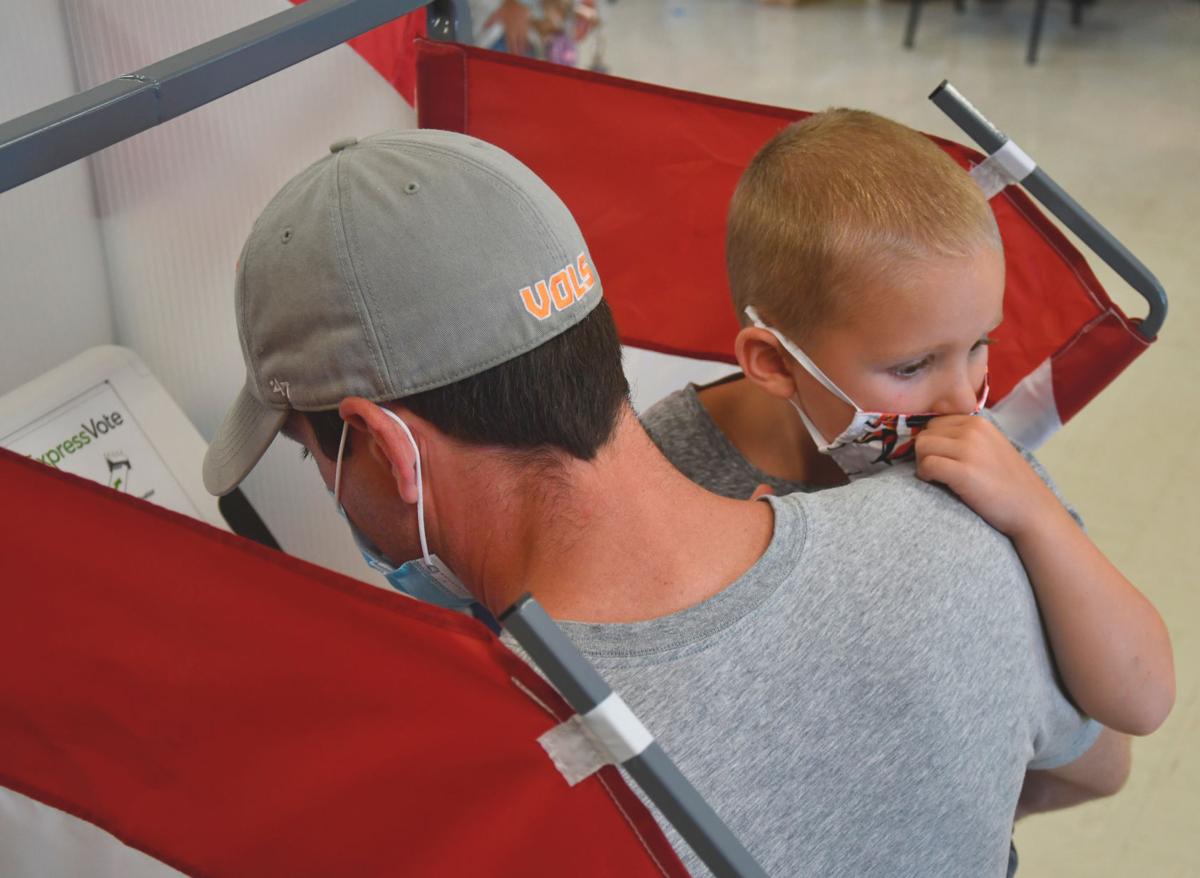 Jeremy Morrow holds his 5-year-old son, Patton, while voting Thursday at First United Methodist Church in Lebanon. Morrow and his wife, Amanda, made Election Day a family affair, as they also brought their two daughters to the poll. “This is a lesson is our government system,” Amanda Morrow said. 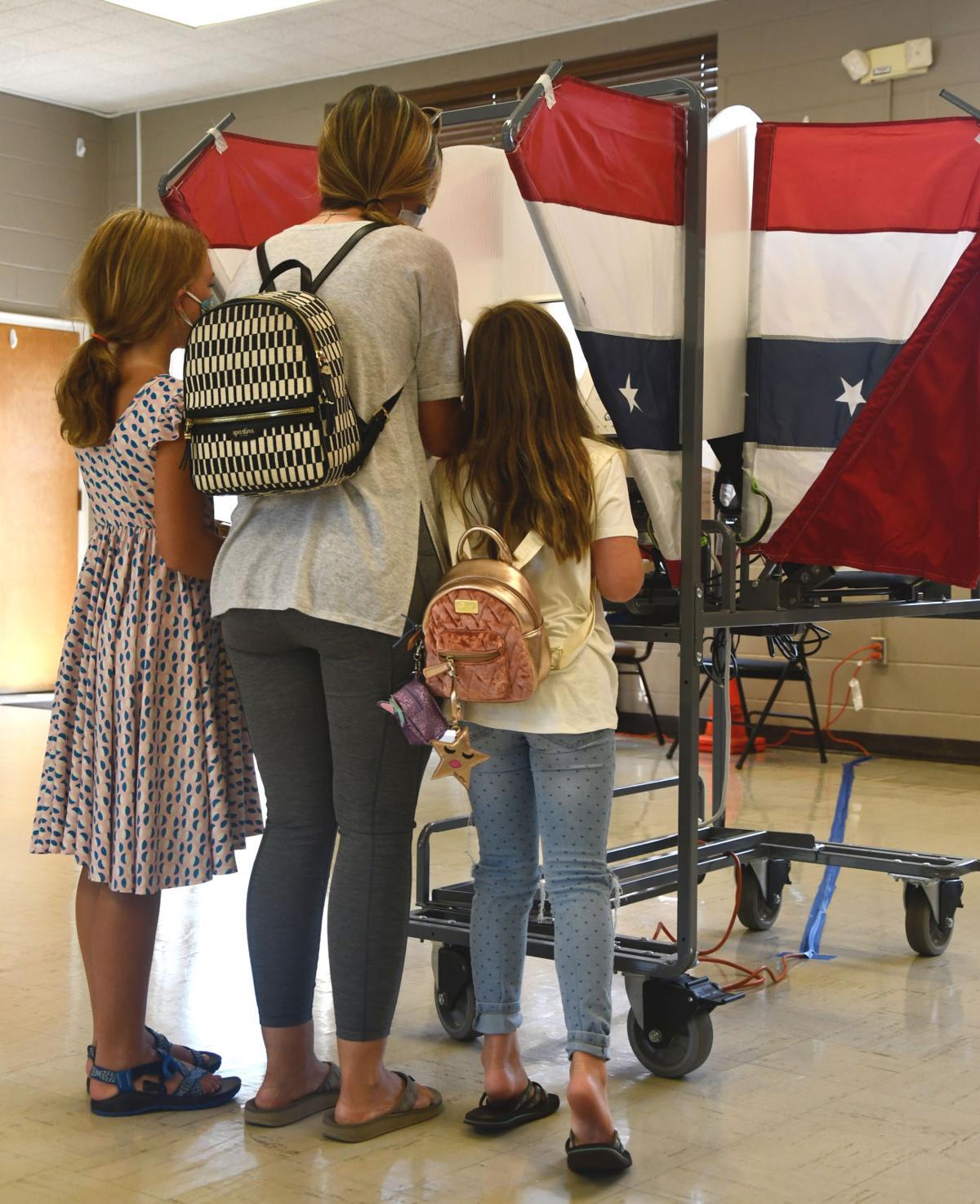 Jeremy Morrow holds his 5-year-old son, Patton, while voting Thursday at First United Methodist Church in Lebanon. Morrow and his wife, Amanda, made Election Day a family affair, as they also brought their two daughters to the poll. “This is a lesson is our government system,” Amanda Morrow said.

The Wilson County Schools Board of Education will have a new look come September thanks to voters who on Thursday rejected incumbents Wayne McNeese and Chad Karl in favor of Carrie Pfeiffer and Jamie Farough, respectively in zones 1 and 7.

In Zone 3, Jon White defeated Don Weathers to replace Mike Gwaltney, who decided not to run to keep his seat. Only incumbent and board chairman Larry Tomlinson kept his Zone 5 seat, triumphing over challenger Glenn Denton.

Tammy Smith, assistant Wilson County elections administrator, said Friday that there were no problems with voting.

One reason for the higher turnout than is 2016, Smith said, was the contested school board races.

There were three challengers to McNeese in the Zone 1 race, and Pfeiffer got 1,387 votes, with McNeese second at 927, followed by Lauren Smith with 895 and Mitch Rollins at 297.

Pfeiffer said Friday, “I am very excited to be able to put it all into action. I’m humbled and honored by the support Zone 1 has given me.”

“Humbled is my word that continues to reverberate,” White said. “To be entrusted to be a conduit for residents, students, teachers and staff is very humbling.”

Tomlinson earned 1,304 votes in his Zone 5 race against Denton, who got 966 votes. Efforts to reach Tomlinson on Friday were unsuccessful.

“I am super excited,” Farough said. “It kind of shows that parents and teachers want board members who will listen to them.”

The new board members, who will be sworn in Sept. 1, will be taking office during difficult times, as Wilson County Schools are recovering from the March 3 tornado that destroyed two schools and trying to open in the midst of the coronavirus pandemic.

In fact, the mandate that all students, teachers and staff wear masks at all times passed by the current board at its meeting Monday is drawing criticism from the newcomers.

Farough said the mandate goes too far, and she would prefer to see the district revert to its previous position that face coverings be “strongly encouraged.”

She said there has never been a documented case, worldwide, of a student infecting a teacher with COVID-19 and that younger students who will be unable to keep from constantly touching and fidgeting with their masks actually poses a greater risk of passing the virus. Furthermore, she said, the board will have to revisit the issue because the language of the motion does not allow for any exceptions, medical or otherwise, from mask wearing.

“The board has to vote to allow exceptions,” she said, adding that school administrators cannot do that without board approval.

COVID-19 is serious, Farough added, saying that she has told her children she expects them to wear masks where social distancing is not possible.

“I do consider it a threat,” she said, but would like to see as great an emphasis put on handwashing as on wearing masks.

Pfeiffer also was critical of the board’s mask decision, but for somewhat different reasons.

“Yes, I do believe masks should be required,” she said, “but the board’s language is overly broad and vague. There should have been more specificity.”

Pfeiffer wants to see medical exceptions made part of the policy and the mandate dropped in situations where social distancing is possible. With school starting Aug. 17 under the hybrid schedule, only about 50% of the student body will be in a school on any given day, which will make social distancing easier.

“Then students should be in situations where they can take off their masks,” she said.

Pfeiffer believes the new board needs to make sure all issues are thoroughly examined before votes are cast.

“I think there is a lot that has happened with the existing board where there wasn’t adequate discussion,” she said.

White also wants the mask issue revisited, and he echoed Pfeiffer on the hybrid schedule reducing the number of students in schools and thus the need to wear masks all the time.

“I feel we need to follow the medical community’s guidance, and to me that is very clear,” he said. But, he added, “asking my 6-year-olds to sit at a desk for 7 hours while wearing a mask was going to be a problem.”

WCS spokesman Bart Barker said a time for Sept. 1 swearing-in ceremony has not yet been set.