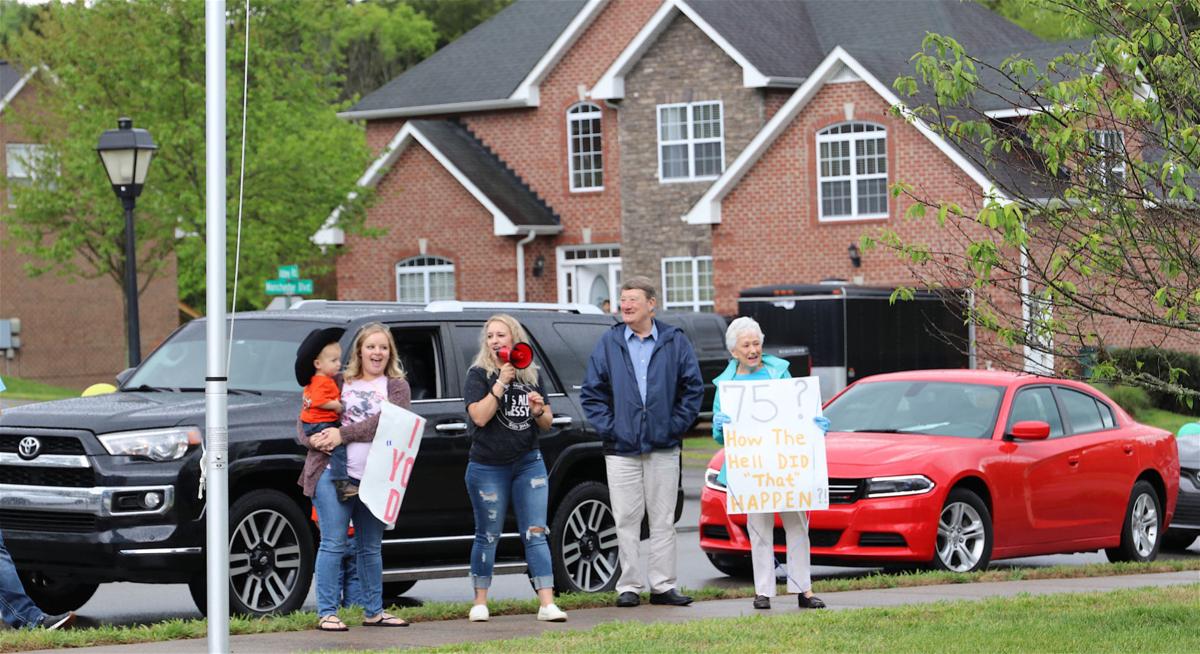 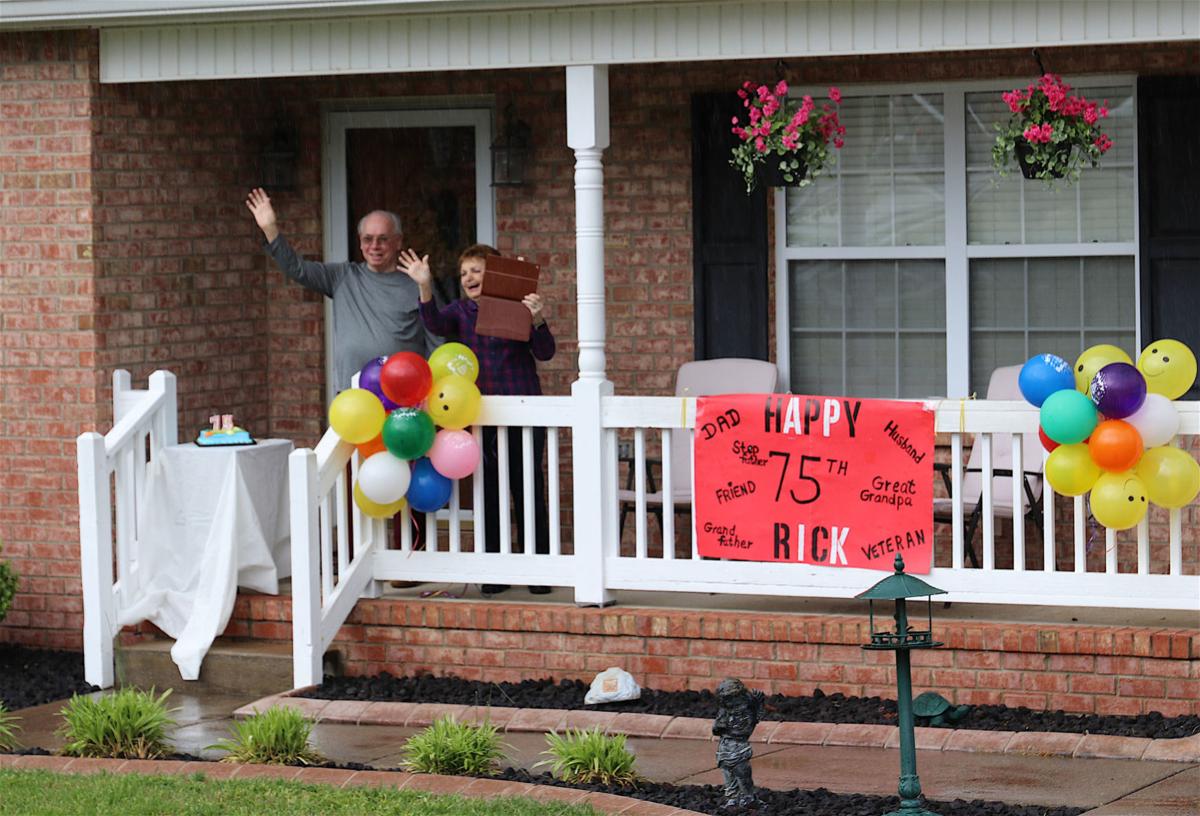 Rick and Valerie Heronemus wave to family and friends as they drive by for his surprise 75th birthday party on Saturday. 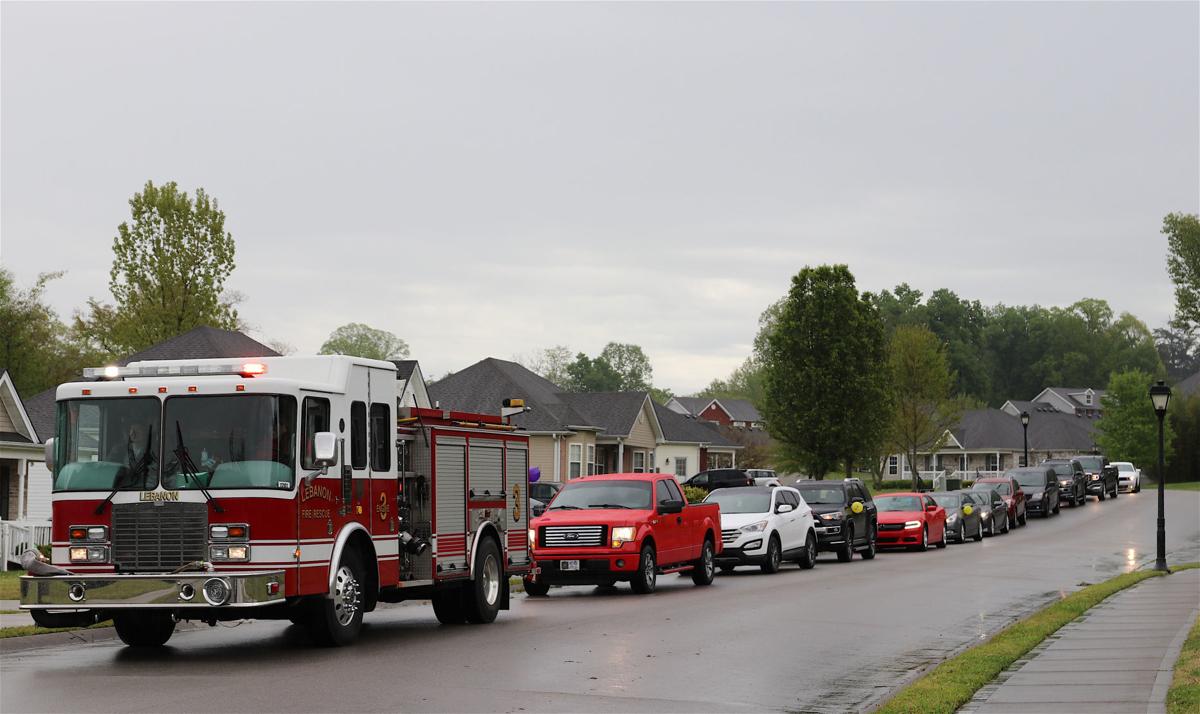 Not even rain could stop the birthday parade, headed up by volunteers from the Lebanon Fire Department’s Station 3.

Rick and Valerie Heronemus wave to family and friends as they drive by for his surprise 75th birthday party on Saturday.

Not even rain could stop the birthday parade, headed up by volunteers from the Lebanon Fire Department’s Station 3.

Rick Heronemus’ 75th birthday started out the same as any other day since he began self-isolating nearly two months ago, but then the fire horn sounded — the signal for his wife Valerie to bring him outside.

Family and friends had been planning Heronemus a surprise party for weeks, and when he stepped onto his front porch he was greeted with a parade of cars, signs, well wishes and even a cake.

“I was really flabbergasted,” he said. “My wife had closed the blinds, turned off the monitor for my security cameras and basically told me to sit down and shut up. All my friends, it was great. It was totally unexpected.”

Before going into isolation, Heronemus was an active member of the community, serving on the Lebanon Senior Center’s board of directors, driving for Meals on Wheels and making connections as a Vietnam War veteran.

When helping to plan the party, stepdaughter Deanna Katchmark made sure to reach out to the people he met through those activities.

“Mom started stressing out big time because they are attached at each other’s hips,” she said. “They know 24/7, every breath they’re taking, where, when, what, how, why … but this was her idea. We just pretty much sent out a massive email to everybody saying that anyone willing and able that loves Rick, show up and show your support.”

Dozens of people answered the call, which allowed Heronemus to catch up with friends from a safe distance.

“Most of my friends are old school and don’t have smart phones, so there were three or four people there I hadn’t had any contact with in several weeks,” he said. “We really do miss the senior center, it’s like a family. They’ve been in touch with us constantly, making sure everything is OK and checking about whether we need food or anything.”

Teresa Botts, the Lebanon Senior Center’s assistant director, said Heronemus is always a welcome presence, both as a board member and when joining in activities.

“He’s just a fun guy,” she said. “He’s been coming out for about 10 years, and he’s always doing something to make people laugh. He loves to dance and comes out to those every week.”

Since the senior center closed, Heronemus and his wife have been finding other ways to spend their time.

“Even at their age in their mid-70s, they’re go-getters,” Katchmark said. “They’re bored as heck, they’re on the internet and they’re probably ordering and buying stuff every day they don’t need to … I called the other day to check on them and he was doing his NASCAR thing, she was playing bingo on the computer, they’re playing cards with each other, just doing what they can.”

Although he misses visiting friends at the senior center, Heronemus is enjoying his time at home and staying in touch with people through Zoom and phone calls.

“I have some friends who are still going out and doing things, but I’m 75 and I don’t need to be out there right now,” he said. “You’re in a different world … but being pent up in the house isn’t too bad.”