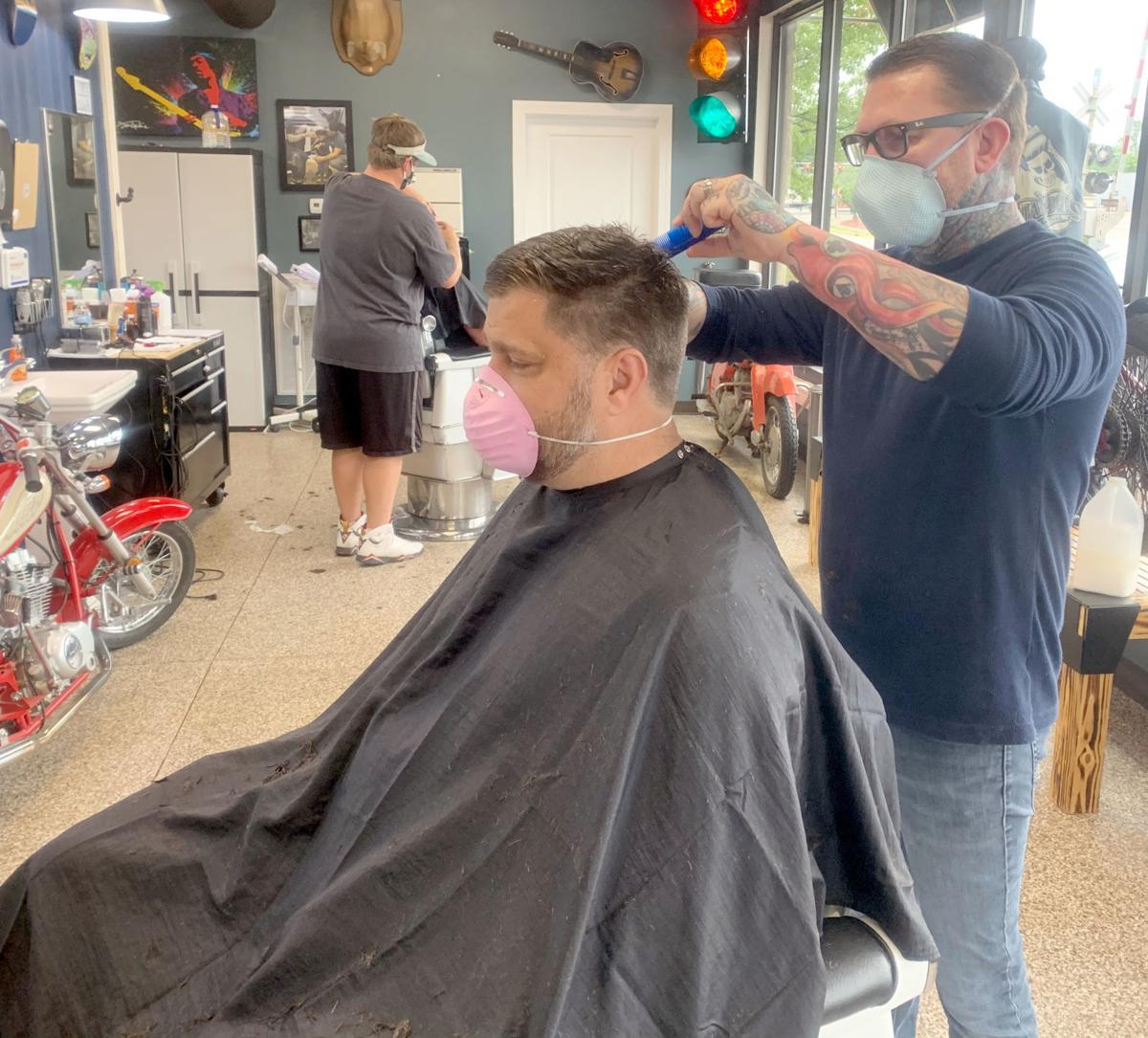 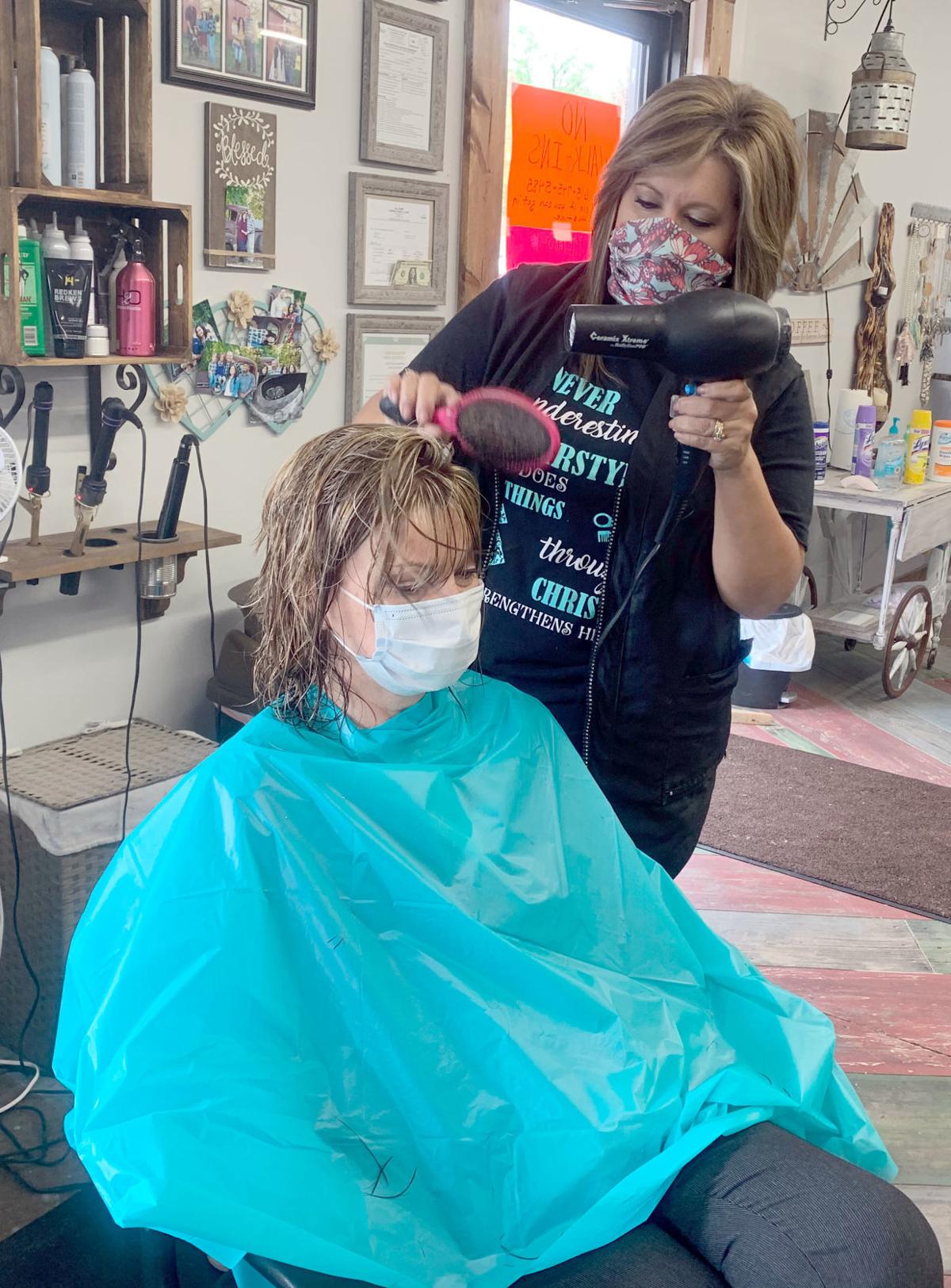 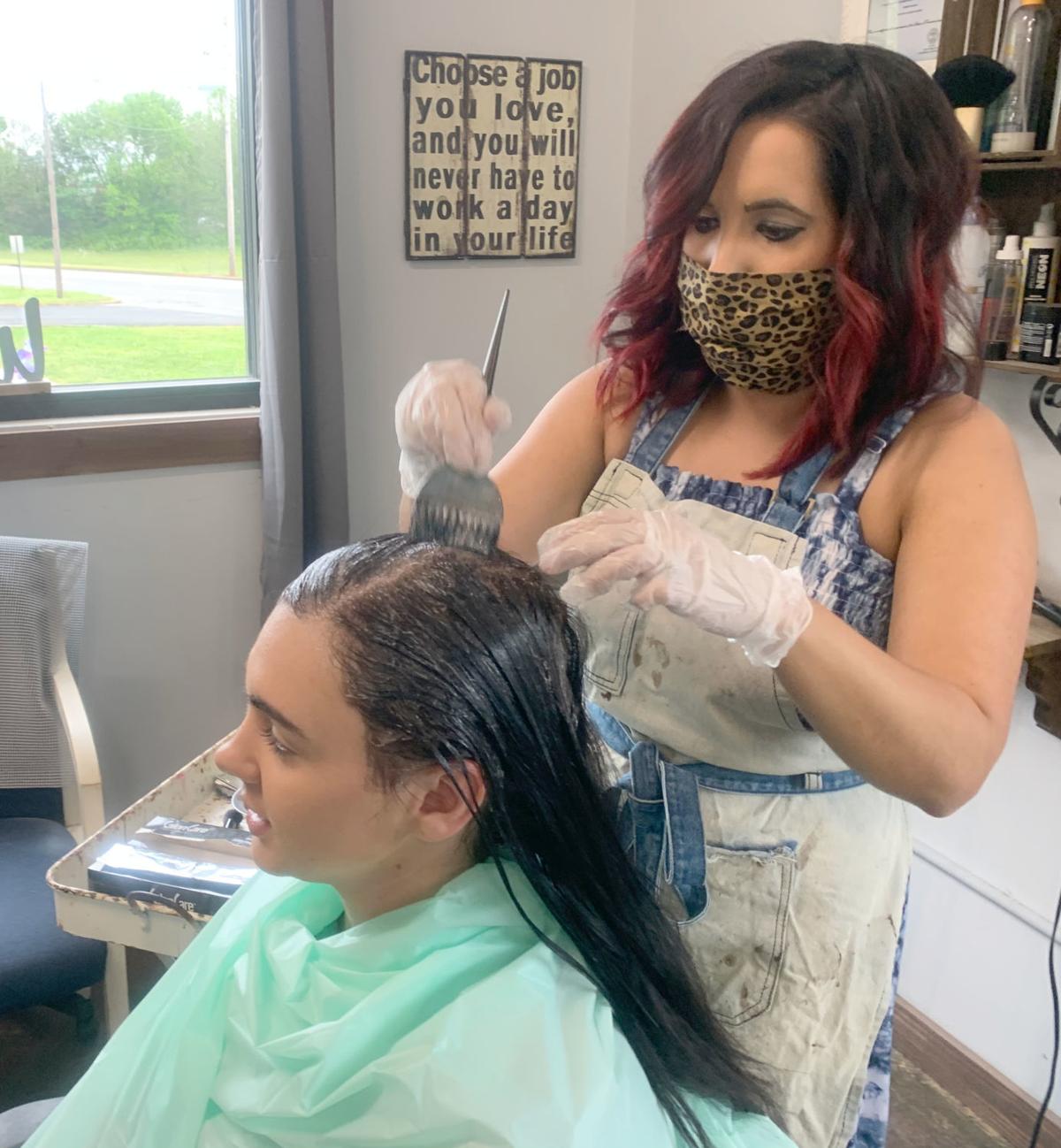 Brittany Holmes, the co-owner of Portland’s Southern Charm Salon and Boutique, gives Kayla Drahus a haircut last Wednesday on the first day that hair salons and barbershops were allowed to reopen.

Brittany Holmes, the co-owner of Portland’s Southern Charm Salon and Boutique, gives Kayla Drahus a haircut last Wednesday on the first day that hair salons and barbershops were allowed to reopen.

And the first thing that she did was to bring a customer to tears.

However, that was a good thing.

“My first one cried,” Holmes — the co-owner of Portland’s Southern Charm Salon and Boutique (along with her mother, Susan Key) — said. “She was thankful we were back. She was way overdue.”

Another of Holmes’ clients, Kayla Drahus, was also overdue for a haircut.

“I was supposed to have an appointment on April 5, so it would have been at least nine, 10 weeks ago, which is crazy,” Drahus said. “I’m normally every five weeks on the dot.”

Drahus was one of the individuals who returned to area salons and barbershops last Wednesday, which was the first day that they were able to reopen after Gov. Bill Lee mandated closures of the close-contact business starting on April 1.

“You don’t think about it until you are stuck at home and have nothing to do, and you have to look at your hair every day and be like, ‘Oh this awful,’ ” Drahus said. “It’s definitely something you took for granted for sure.”

After Lee mandated on April 28 that barbershops and hair salons be among the entities that would remain closed until May 29, he did an about-face one day later, amending section 11 and paragraph A of Executive Order 30 to allow businesses or organizations that perform close-contact personal services such as hair salons, barbershops, massage therapists and nail technicians to reopen last Wednesday.

“We don’t have much of a choice,” Gregg Dillard — the owner of Portland’s Southern Barber — said. “It’s either go back to work or lose the shop. Lucky for me, I have a great landlord. He assured me I won’t lose the shop … but you don’t want to get behind. You start getting 4,000 or 5,000 behind and in the hole, and you’ve dug a hole you can’t get out of.”

Both Dillard and Holmes have missed being in their elements.

“It has been tough,” Holmes said. “I’ve watched my mom cry. I have cried. As a business owner, our salon is something we’ve dreamed of. To see that get shut down … the girls we work with, we see them more than our families. It was tough. Your clients become your family. It’s hard not getting to see them like I normally would. It’s been difficult.”

Dillard added, “It’s like a fish out of water. I’ve been going up to the shop every two or three days, just trying to get back in my element. It’s been an adjustment.”

Like the customers, Holmes admitted that the stylists may take things for granted as well.

“We fall into a routine with our jobs,” Holmes said. “When that gets taken away, you realize how much you love it. Sometimes, you might take it for granted. It’s definitely been an eye-opener.”

Workers in the industry have experienced different results in terms of receiving assistance.

All eight stylists in Holmes’ salon have applied for unemployment, with more than half of those individuals receiving assistance.

However, the four gentlemen who work in Southern Barber — which had been closed since March 28 — have not been as fortunate.

“It’s been very tough,” Dillard said. “We’ve all filed for unemployment. As far as I know, at this point, none of us have seen a dime of unemployment.

“We got the stimulus money, but that was to keep my family (assisted). We took half of the stimulus check to pay the lease. Luckily, my wife is still working, but that doesn’t cover all the bills.”

Dillard has also applied for COVID-19-related small business loans, but he has not yet received any information on that.

Holmes is not one of the stylists who have received unemployment benefits, but she is quick to point out that her clients have provided support since the shop was last open on March 21.

“They have been so supportive,” Holmes said. “Many clients have bought gift cards and sent care packages to us. We’ve been overwhelmed at how supportive they’ve been. They’ve been amazing.”

While excited, the stylists and barbers in both shops were somewhat apprehensive to return due to the safety guidelines that are now in place.

“The majority of us are ready to come back,” Dillard said. “We’re totally excited about it, but we’re kind of worried. I’m kind of worried. I feel like if we don’t do everything to the T … in a crisis like this, especially a barbershop or a salon, it takes one thing (to go wrong). We’re afraid of some backlash. Everybody has to wear a facemask, me and the client. It’s going to be challenging cutting around the ears.

“In a barbershop, you have all different types of personalities. They want to come back, but they want to come back into it safely. They’re excited to come back because the money is running short. Not all of us have that big nest egg behind us. One of us is the only income for his household, so I know this has been extremely difficult for him.”

Individuals are not allowed to wait for his/her appointment in the shops. Only 50% of the number of work stations can be utilized. Clean or disposable capes and linens must be provided for each client, and areas that are used must be cleaned and sanitized between each client.

Stylists must wear face masks, and both stylists and clients must wash their hands before the service is provided.

“We were so excited, but I think we were kind of nervous about the guidelines,” Holmes said. “The last couple of weeks have been so stressful, but being able to provide for our families is the biggest blessing.”

Regardless of the safety precautions, all were ready to be back in business.

“It was crazy,” Holmes said. “It was real hard to get used to some of the guidelines we have to follow. That was an adjustment. Normally, we would do a color and be doing a cut (during an overlap in that time). We can’t do that now. We have to space out time to clean. It’s tough figuring out how to space out your appointments. Most have been very understanding with the guidelines. Everybody was just happy we were open.”

The demand is expected to be heavy for the forseeable future.

As a result, Dillard, who normally works from Tuesday through Saturday, will also work on Mondays and will likely extend his half-day of work on Saturday to a full day.

“For the next two and a half months, I don’t have a spot to put a person in,” Dillard said. “It’s going to be busy.

“We have a lot of people who want to book from Kentucky who have never been here before. They’re going to be probably two or three weeks behind us.”

Holmes — who has been a co-owner of her salon for four years — does not typically work on Mondays but will accept clients six days per week as well.

She said that Key is currently booked for the next four weeks.

“I’m trying to fit everybody in, and so, we’re working extra days,” Holmes said. “Most of my clients have been really understanding. Some text me and say, ‘I know you are slammed right now, but just let me know when you have a spot.’ It really does make it easier when you have clients who are understanding.”

The frantic first days back were a welcome experience for Dillard.