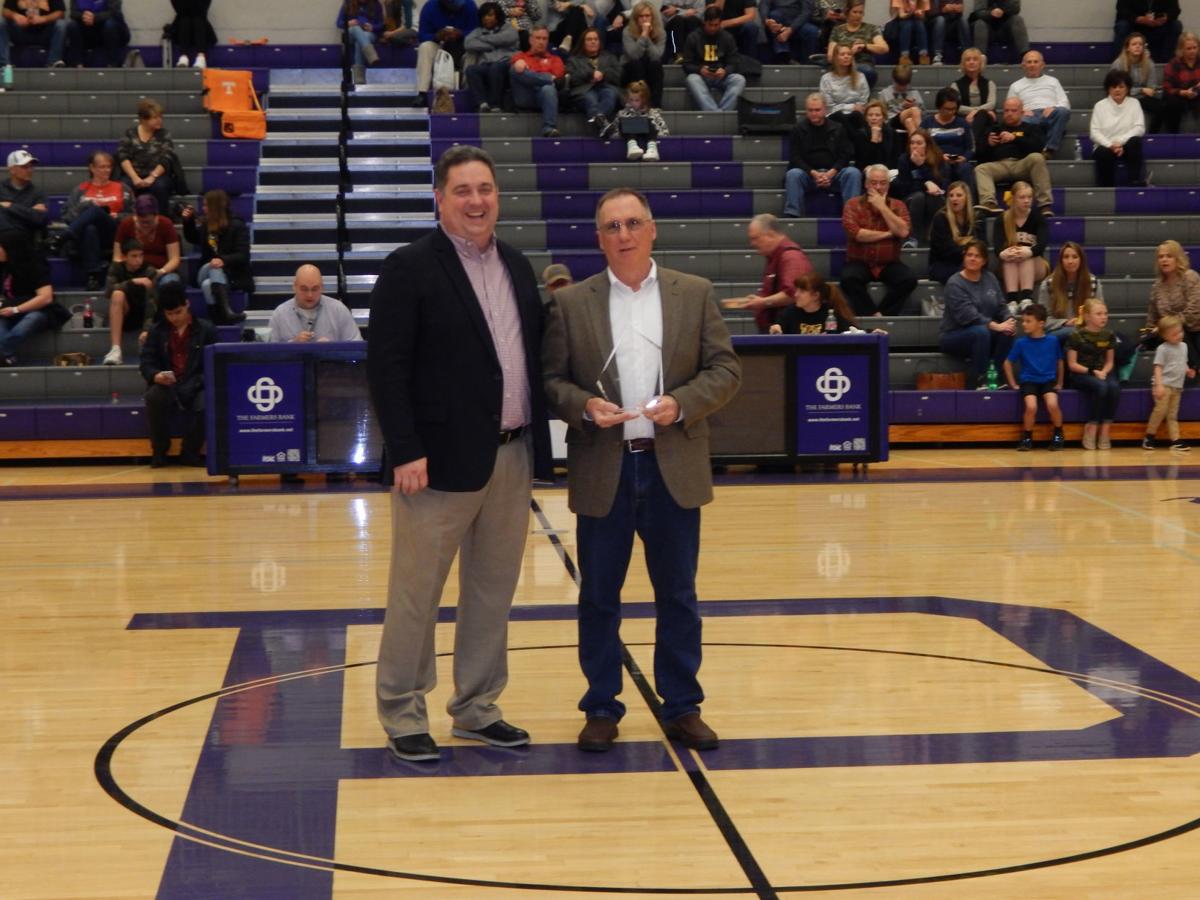 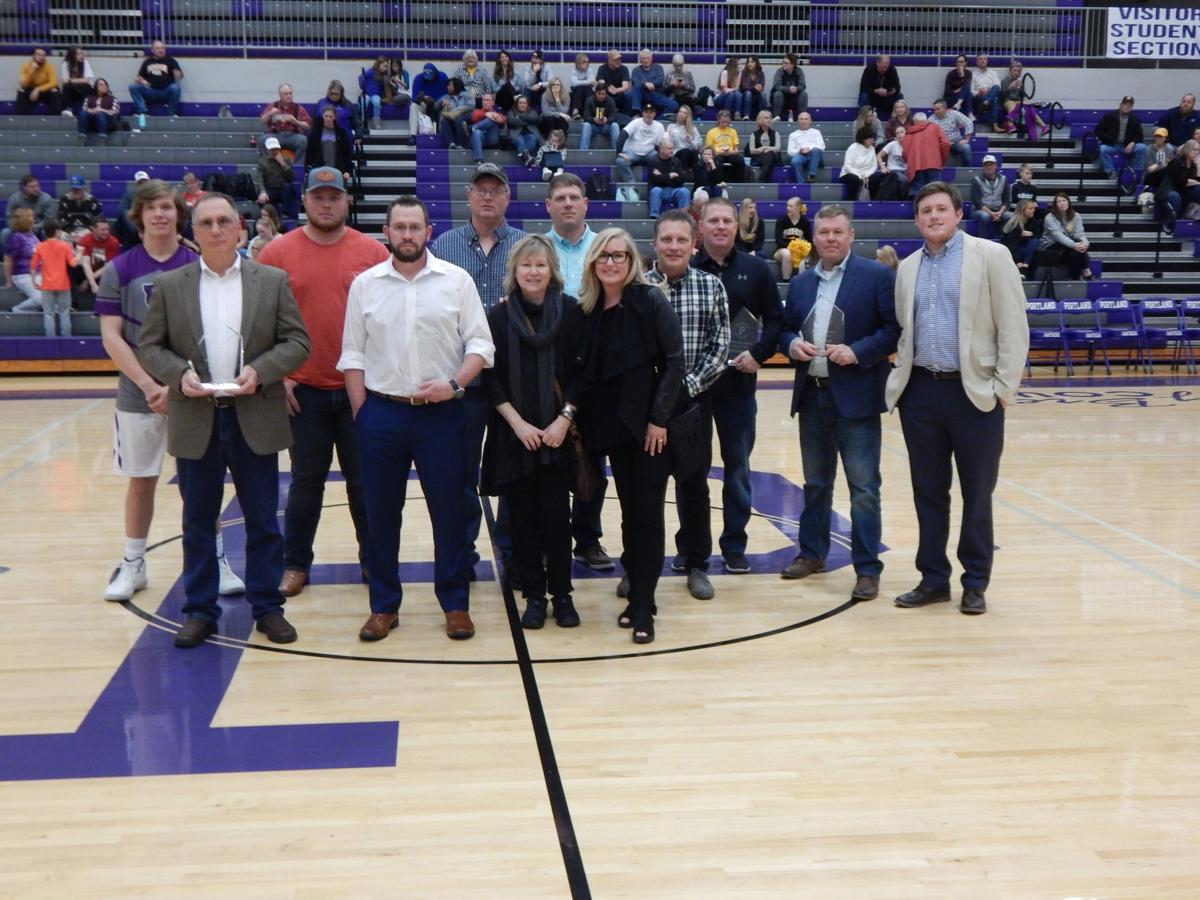 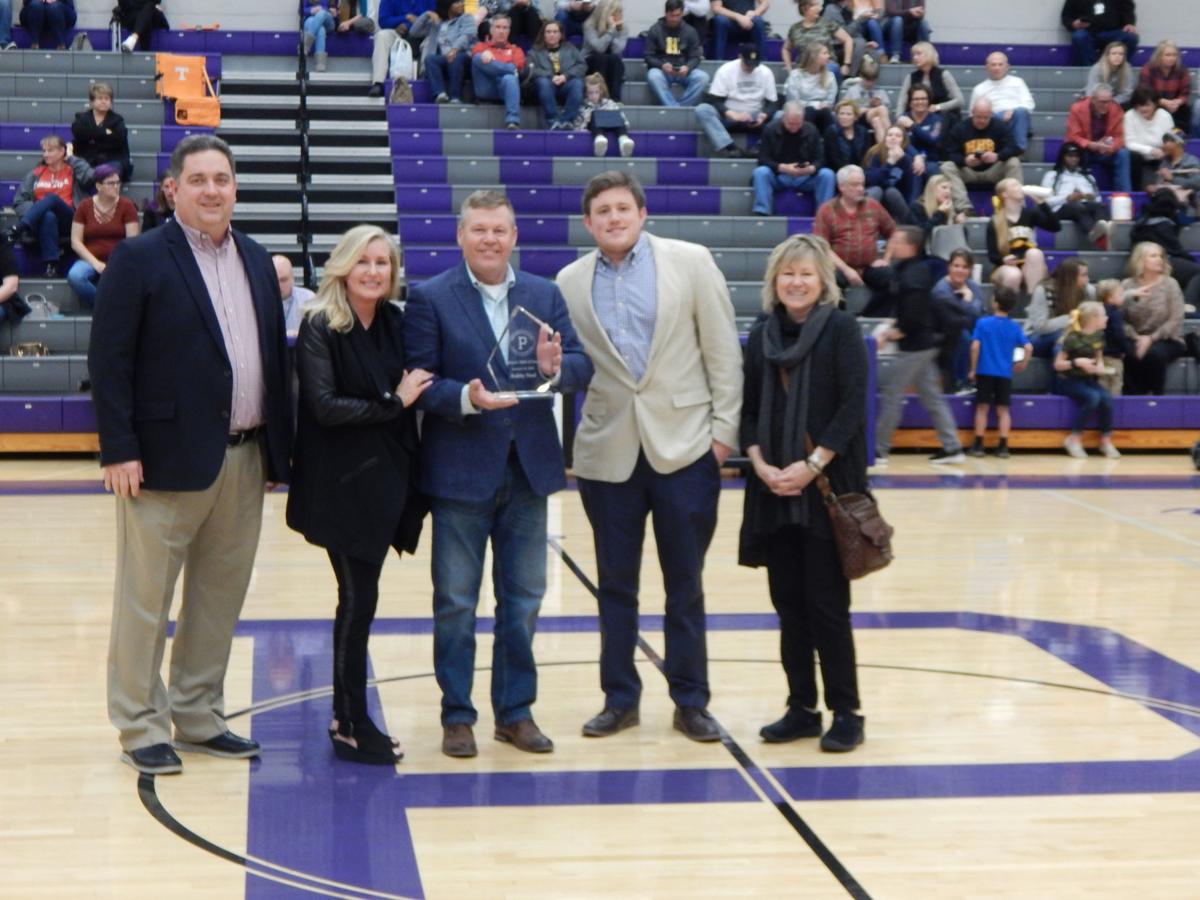 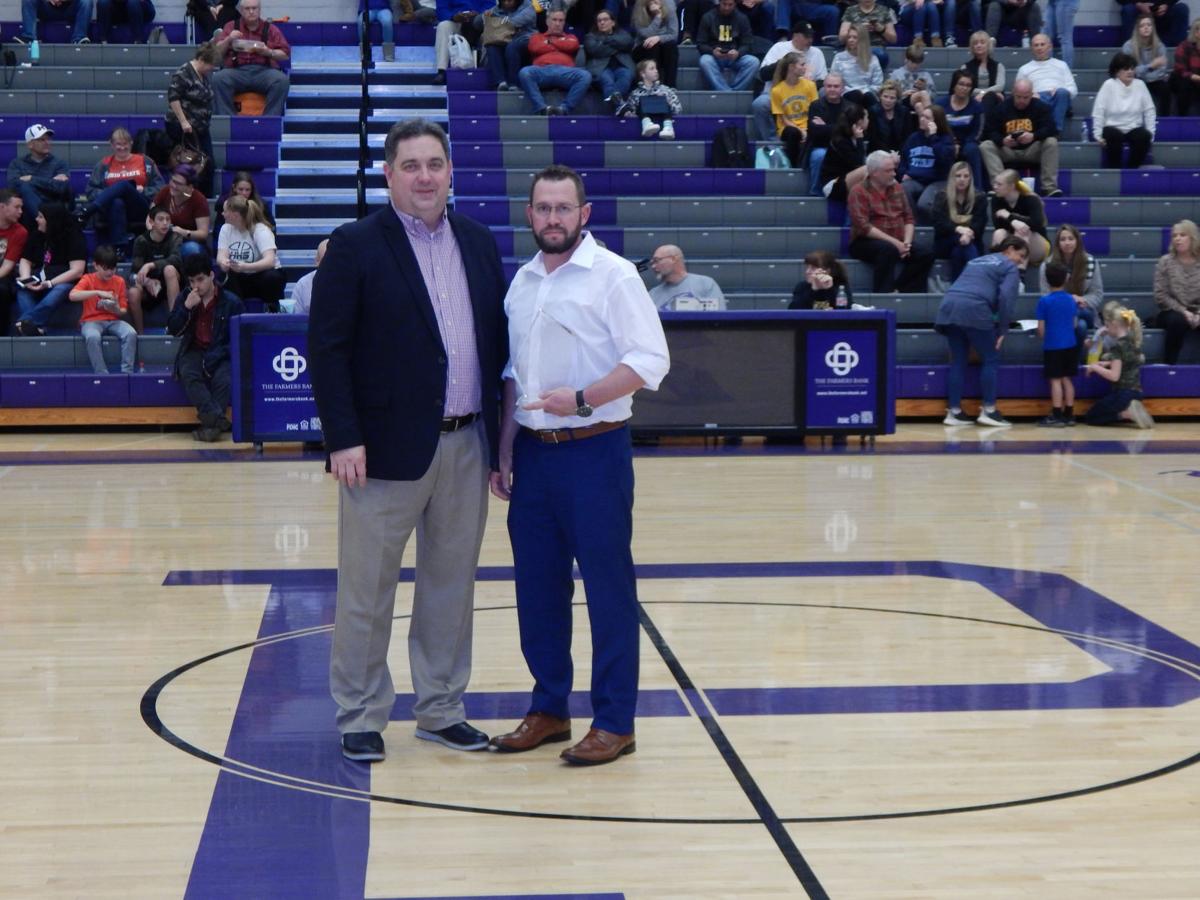 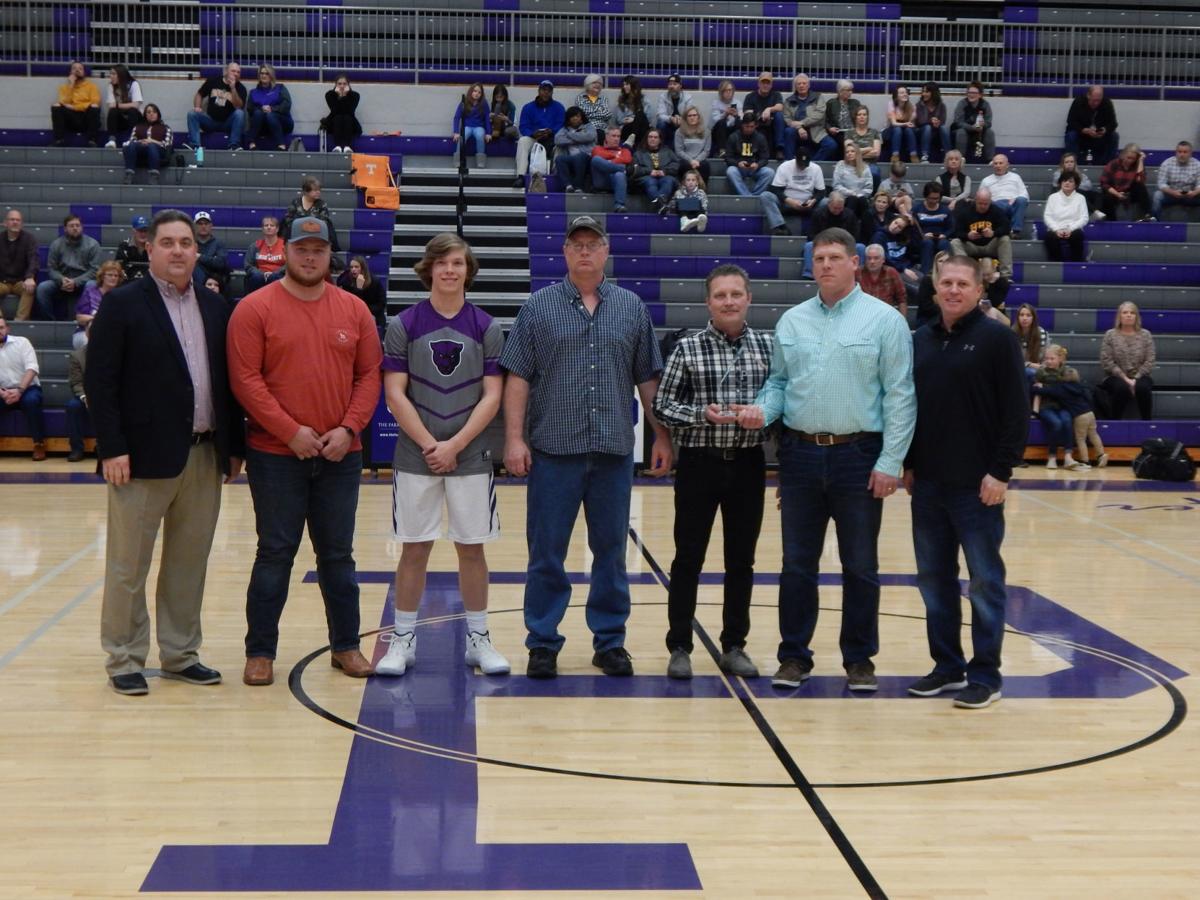 Portland High principal David Woods with the family the late Lanny Smallwood, who was honored as a 2020 PHS Sports Hall of Fame inductee.

Portland High principal David Woods with the family the late Lanny Smallwood, who was honored as a 2020 PHS Sports Hall of Fame inductee.

The sixth Hall of fame class at Portland High School was recognized last Friday between the girls’ and boys’ basketball game. Four new inductees were added to the 22 that were already in the Hall of Fame.

Bobby Neal, Class of 1953, was one half of the famed “Touchdown Twins” alongside Glenn Glover, who was named to the Hall of Fame in 2015. Neal played for the Panthers more than 60 years ago, but his legendary career is one that is still talked about around town. In 1952, the Tennessean newspaper touted Neal and Glover as one of the best running attacks in the state. Neal played for the Purple and White from his seventh grade through his senior season.

“This is very sweet,” Neal’s son, Robert Gus Neal III, said after the ceremony. “My dad was a great football player. When we would come into town, folks would stop us and tell us they watched him play, and it made me proud. But as great of a football player he was, he was a decent human being and humble. And for that he deserved the Hall of Fame.”

“He did speak of Glover quite a bit,” Neal explained. “But dad didn’t talk a lot about football. He played it, loved it, and enjoyed it, then he became a father, family man, and he served his country. This is a real honor and appreciated.”

During his time as a Sumner County High School football player, the Panthers were constantly ranked among the top teams in the mid-state and in Neal’s senior campaign, the Purple were ranked 11th in the state at one point.

Among Neal’s exploits, he rushed for 1,087 yards and scored 130 points as a junior and was selected to the Nashville Banner’s third team all mid-state team. In that year, the Panthers made their first ever postseason appearance in the Crimson Bowl and Neal had 20 carries for 123 yards. He also scored five touchdowns in a game against Centerville.

As a senior, Neal was voted co-captain of the team, returned a kickoff 75 yards in a win over Hendersonville and scored the lone touchdown in the Panthers win over arch-rival Gallatin.

After high school, Neal played football at the University of Wyoming before transferring to Austin Peay where he graduated in 1957. He served in the Marines from 1957-1979. Neal served his country in Okinawa, Guantanamo Bay Cuba during the Cuban Missile Crisis and completed two combat duty tours in Vietnam. He retired as a lieutenant colonel and continued to serve veterans and their families as a Veterans Affairs representative for the State Department of Veterans Affairs. He received the Bronze Star and the Vietnam Cross of Gallantry.

Neal was a member of the First United Methodist Church of Gallatin and an active volunteer for Habitat for Humanity.

Lanny Smallwood, class of 1974, was a basketball player that according to his high school coach Larry Moores, “was the little man that no one could stop.”

Smallwood held the school’s scoring record for most points in a single season, game, and in a career for 30 years.

“This is wonderful,” his sister Linda Smallwood said. “He would be proud that people thought still thought about him. Lanny was not one to seek recognition. He loved basketball. We had a wood basket in the back yard, and he would practice hard and play hard. Tonight is a special moment for our family.”

Smallwood played before the 3-point line had been established. He averaged 26.5 points per game in his senior campaign and was named to the All-District 12 regular season and all-tournament squad. Smallwood was selected Most Valuable Player of the Vol State Conference his senior year and named to the Vol State Conference tournament squad in both his junior and senior seasons.

Smallwood was named MVP of the ’73-74 team and was voted captain. Smallwood was picked by his senior class as Most Athletic and was a member of the Fellowship of Christian Athletes. After high school, Smallwood attended Aquinas Junior College in Nashville on a basketball scholarship and played for one season.

Smallwood was a member of the first golf team at PHS and was Club Champion at Dogwood Hills in 1977 at the age of 21. Lanny worked at Johnson Industries for 31 years and passed away in 2013. Smallwood had two sons and four grandchildren.

Matt Taylor, class of 1996, was an integral part of Portland’s success in the mid 1990s. Taylor, who played three sports from 1993-1996, was a part of the Portland football team that went 32-8 in Taylor’s last three seasons including a 26-3 mark in 1994 and 1995 when the Purple and White advanced to the state championship in 1994 and the semifinals the following year.

“Matt was a tremendous athlete and he led by example,” former PHS coach Roger Perry said in accepting the award due to Taylor’s absence. “He always did the right thing on and off the football field. Matt was very coachable, intelligent and had all the attributes a coach wants to have in a player. Matt was very competitive and loved to play and was a joy to coach. He was exciting to watch on the football field and made plays happen. He would always give credit to his teammates and wanted to win.”

Taylor was a safety, punt returner, kicker, receiver, and quarterback during his four years at PHS. During his junior campaign, Taylor was named to the All-Midstate and was selected defensive player of the year in Region 5-AAA. He was also a member of the baseball team that won the district in the spring of 1995.

In his senior campaign, Taylor was a Mr. Football finalist in Class 3-A and was named captain of the team, voted MVP by his teammates and earned a spot on the Nashville Banner All-Midstate team as a defensive back. Taylor was the Region 5-AAA Special Teams Player of the Year and MVP of the region. He was twice named to the all-county squad and earned a spot on the Tennessee Sportswriters Football Athlete of the year in both his junior and senior seasons.

Taylor finished his football career with over 2,500 total yards and scored 201 points. Defensively, he finished with 186 tackles. Taylor was the point guard on the basketball team and played several positions for the Portland baseball team.

After high school, Taylor attended Austin Peay State University where he played as a wide receiver. He played one season before starting his professional career in residential construction and now owns Stratton-Taylor Builders and is married to Leigh Curtis Taylor.

Philip Thayer, class of 2002, was a two-sport standout for the Panthers during his high school career. In baseball, “Gunner” was a three-time all-district selection and was named to the all-county squad all four years. Thayer was Player of the year in the county as a senior. Thayer was a part of two district championship teams, played in three region tournament title games and the Purple finished third in the state in 2002. Thayer was the 2002 Easton Redline national High School Defensive Player of the Year, the 2001 Nashville Old Timers Association Player of the Year and was named to the All-Midstate team in Thayer’s junior and senior campaigns. He averaged .424 at the plate in his career.

“I’m very honored to receive this,” Thayer commented. “I was not aware of the Hall of Fame until Mrs. (Ginger) Lesemann called me to tell me I was being inducted. I look at the names on the board, and it’s an impressive list. I played my last game in 2007. Now I’m coaching my oldest son and that is cool. We won the state tournament (Louisiana Cal Ripken State Tournament) last summer.”

After graduation, Thayer attended Western Kentucky University where he played in his freshman and sophomore seasons. In Thayer’s junior year, he transferred to Trevecca Nazarene University to finish up his career. He was named all-conference as a senior and led all shortstops in the region in batting average, RBIS, doubles, home runs and slugging percentage. While in college, Thayer played in the Clark Griffith Summer Wooden Bat Collegiate League where he helped his all-star team win two conference tournament championships and one regular season title.

Today, Thayer is currently a Field Operations manager at BFM Land Surveying Company in Kenner, La. Thayer is married to Kristen and has three sons, Aiden, Jaxen, and Owen.