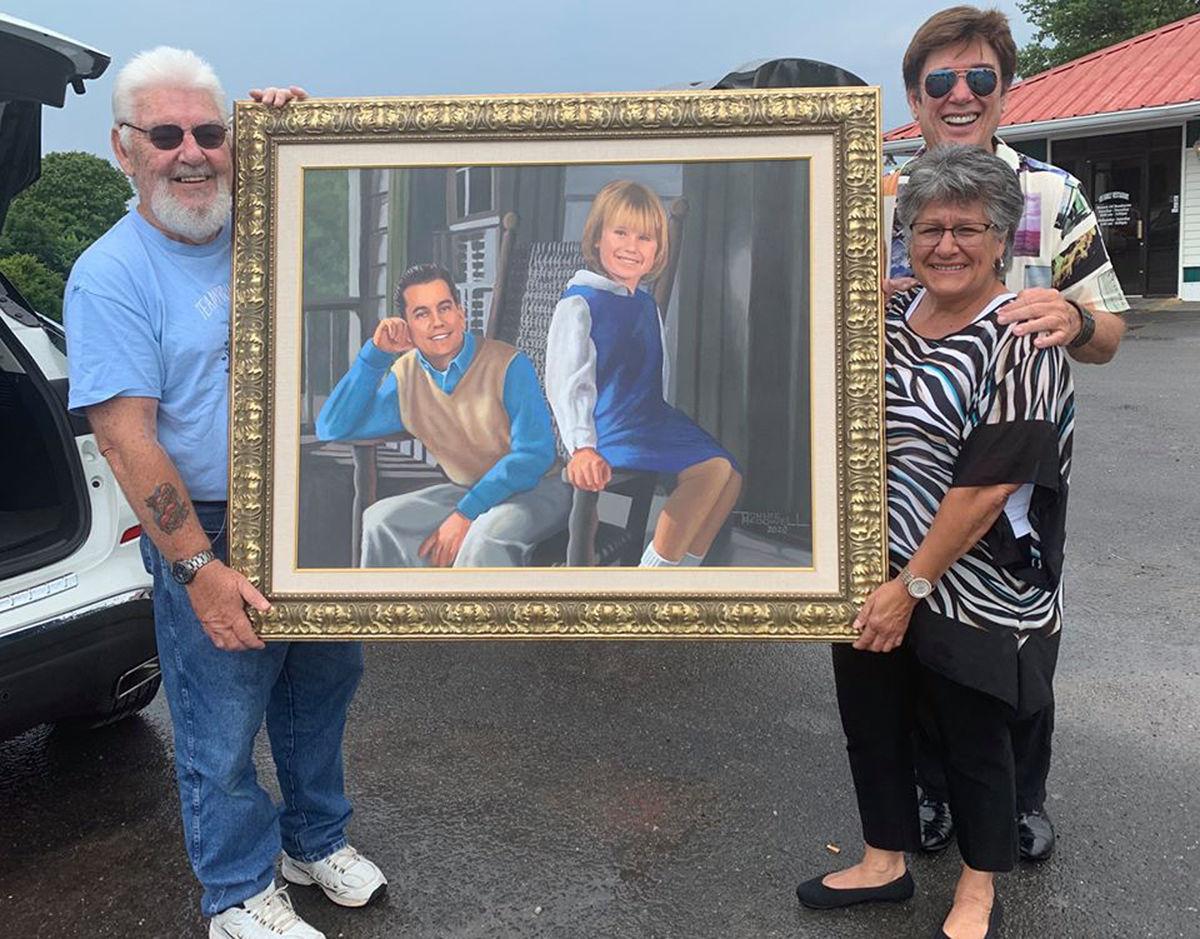 Jack and Barbara Hunter display a portrait of their deceased son, Scott, and granddaughter, Kristen. The portrait was a gift from country music star and Jack’s longtime friend Ronnie McDowell, who is standing with Barbara. 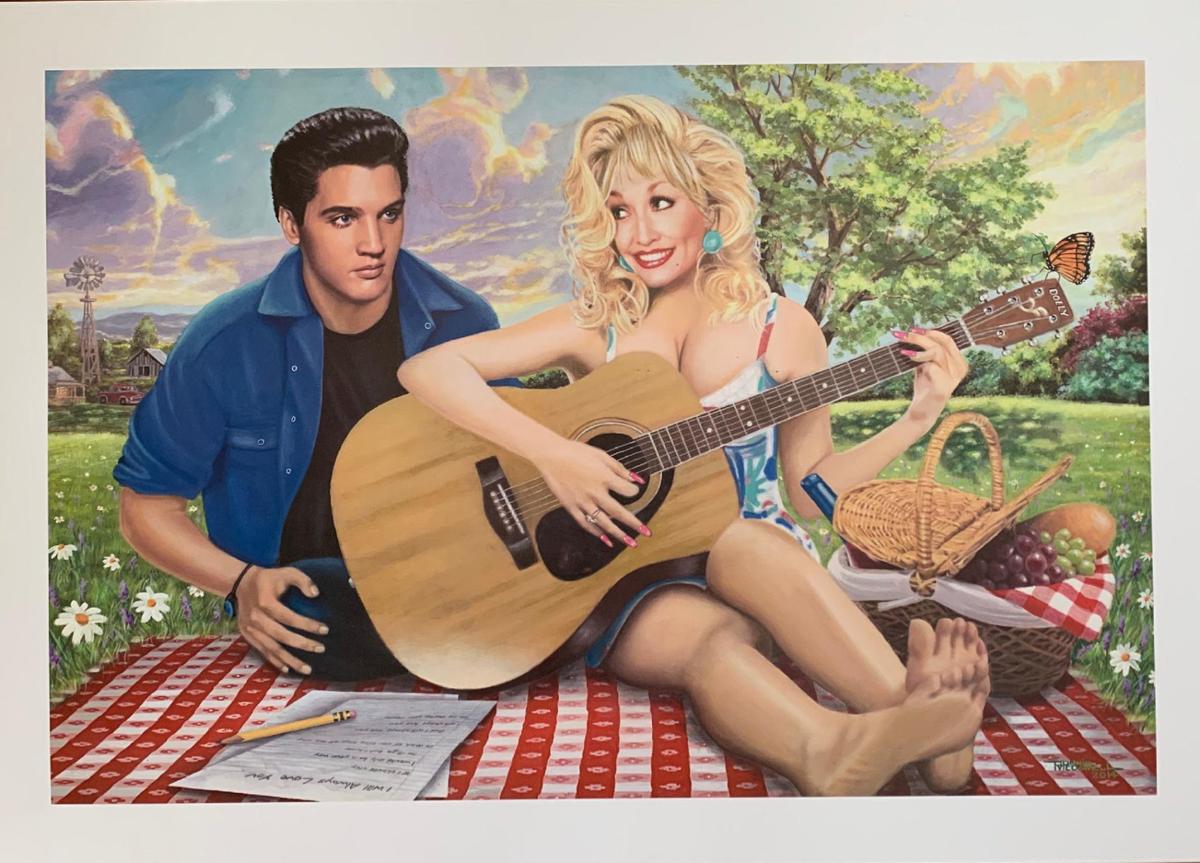 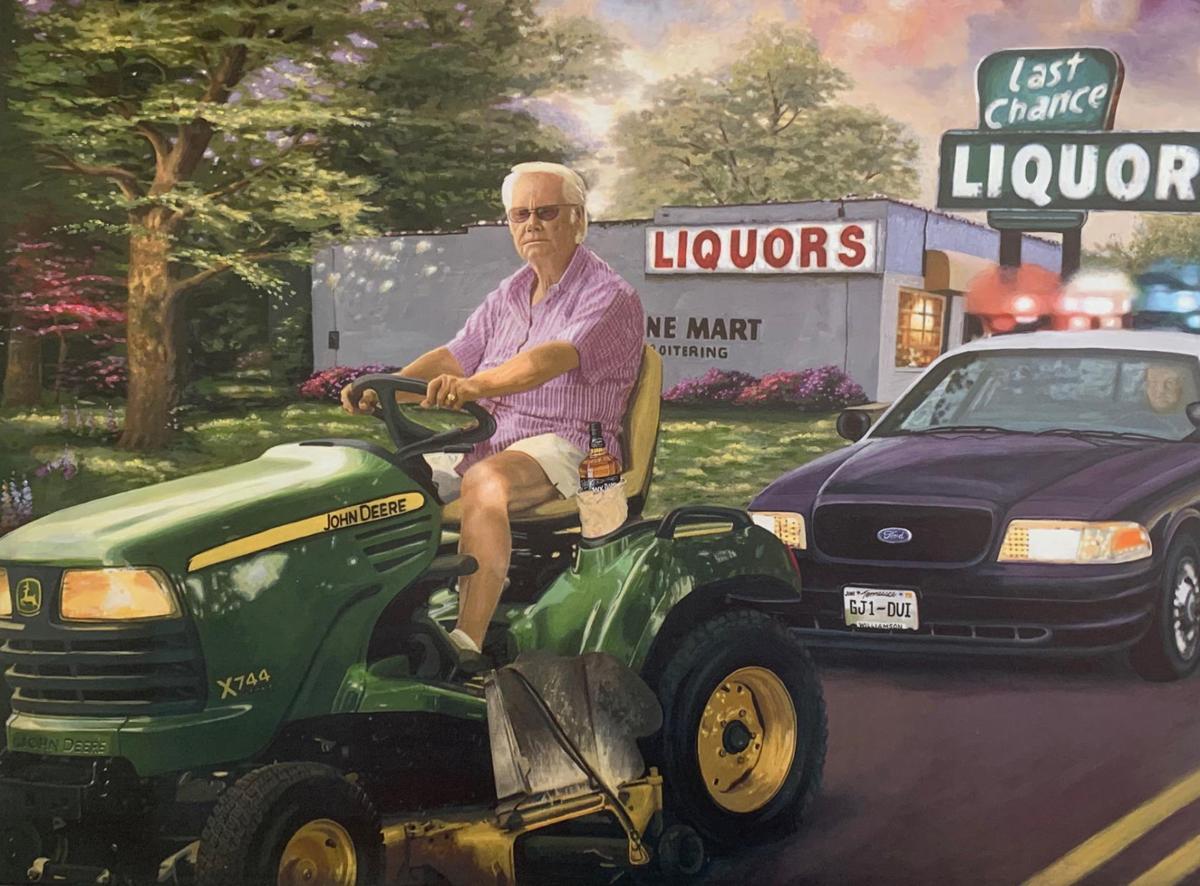 Ronnie McDowell painted this picture of George Jones getting pulled over for a charge of driving under the influence on his lawnmower at Jones’ request.

Jack and Barbara Hunter display a portrait of their deceased son, Scott, and granddaughter, Kristen. The portrait was a gift from country music star and Jack’s longtime friend Ronnie McDowell, who is standing with Barbara.

Ronnie McDowell painted this picture of George Jones getting pulled over for a charge of driving under the influence on his lawnmower at Jones’ request.

Painting with words and melodies is what Portland native Ronnie McDowell has become best known for over a decades-long career in country music.

However, McDowell is equally an artist in the traditional sense — painting with colors and images with the same love of his craft.

That love of his art and a long-time friendship recently led him to him creating a painting to honor the family of a local man who had lost his son and granddaughter.

McDowell painted a portrait of Scott Hunter and Kristen Hunter and then presented that portrait to Jack Hunter, one of his oldest friends from his school days.

“Jack and I went to school together,” McDowell said. “I think he was a year or two ahead of me. But we’ve known each other that long. When I had my first record that changed my life, Jack went on the road with me and sold concessions. He worked with me for quite a while.”

Hunter added, “It was my idea. I’ve known Ronnie’s ability for a long time … and I had this thought after my son passed that I’d like to have Ronnie do a portrait of them.”

Tragedy first struck the Hunter family in March of 2009 when Jack’s granddaughter, Kristen, was hospitalized with an unknown illness. The 11-year-old contracted MRSA (methicillin-resistant Staphylococcus aureus) and passed away eight days later.

In Kristen’s memory, a foundation was set up to provide a scholarship each year to a student at Portland High School and Westmoreland High until what would have been her senior year.

Hunter said that he met with McDowell’s brother and mentioned the idea of a painting of his lost loved ones. The brother immediately called McDowell, who was on board.

“About three weeks later, he had finished it,” Hunter said. “We’re just so grateful to Ronnie for what he’s done. He’s brought them back to life a little bit for us in the work he does.”

The painting hangs in the home that he shares with his wife.

“Jack wanted me to paint them, and I’ve been doing a lot of portraits in this downtime that we’re experiencing,” McDowell said. “When I gave them the portrait, they both cried. I can’t wrap my mind around losing children and grandchildren.”

McDowell said that the Hunters’ portrait was one of his favorites. Father and daughter are portrayed on an old porch setting, smiling back at the viewer.

Painting has been a part of McDowell’s life almost as long as music. His first painting was in 1956 and was of a “big red fire engine” for his first-grade teacher in Portland.

McDowell said that he “has been painting ever since.”

He has painted for the Disney Corporation for the past six years, painting portraits of Walt Disney himself and some of the company’s beloved cartoon characters, such as Mickey Mouse, Donald Duck, Buzz Lightyear and even Oswald the Lucky Rabbit.

McDowell has also painted for a number of his friends in the country music industry, including legends such as George Jones, Loretta Lynn and Dolly Parton. One of his paintings even hangs in the Tupelo, Mississippi, childhood home of Elvis Presley, who McDowell considers one of his musical idols. McDowell’s first hit song, “The King Is Gone,” was written in 1977 after Presley’s death.

“It’s an escapism for me,” McDowell said. “I love it, almost as much as I love writing songs and performing. When I do these paintings, I never know the journey they’re going to take me on.”

One of his favorite paintings is of Elvis and Dolly Parton, who McDowell recorded a duet with for his new album, “Country Heaven.”

“Dolly told me, ‘I always wanted (Elvis) to record ‘I Will Always Love You,’ and I thought, ‘I’ll paint Dolly singing it to Elvis on a picnic,’ ” McDowell said.

“He called me and asked me to paint him getting a DUI (driving under the influence charge) on his lawnmower,” McDowell said. “When I painted it, he called me Christmas Day and said, ‘Bring it over.’ I got to spend that Christmas with my friend and icon.”

One of McDowell’s sons, Tyler, helps with the paintings by getting pictures together of the subjects for McDowell to incorporate into his art. Another son, Ronnie Dean, is the drummer in McDowell’s band.

“It’s a wonderful collaboration with my children,” McDowell said. “I try to include my children and grandchildren in everything I do. I’ve had a blessed life.”