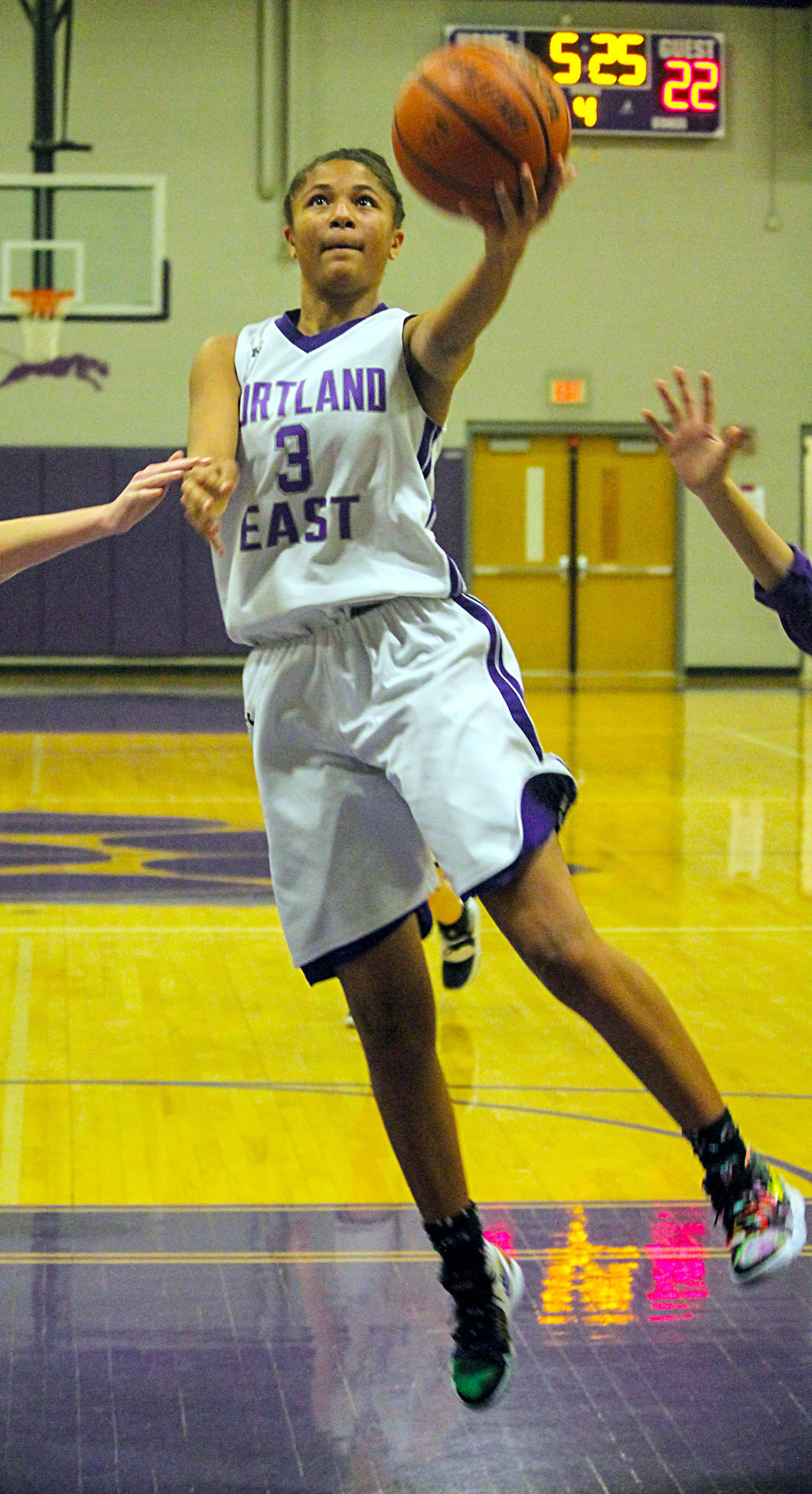 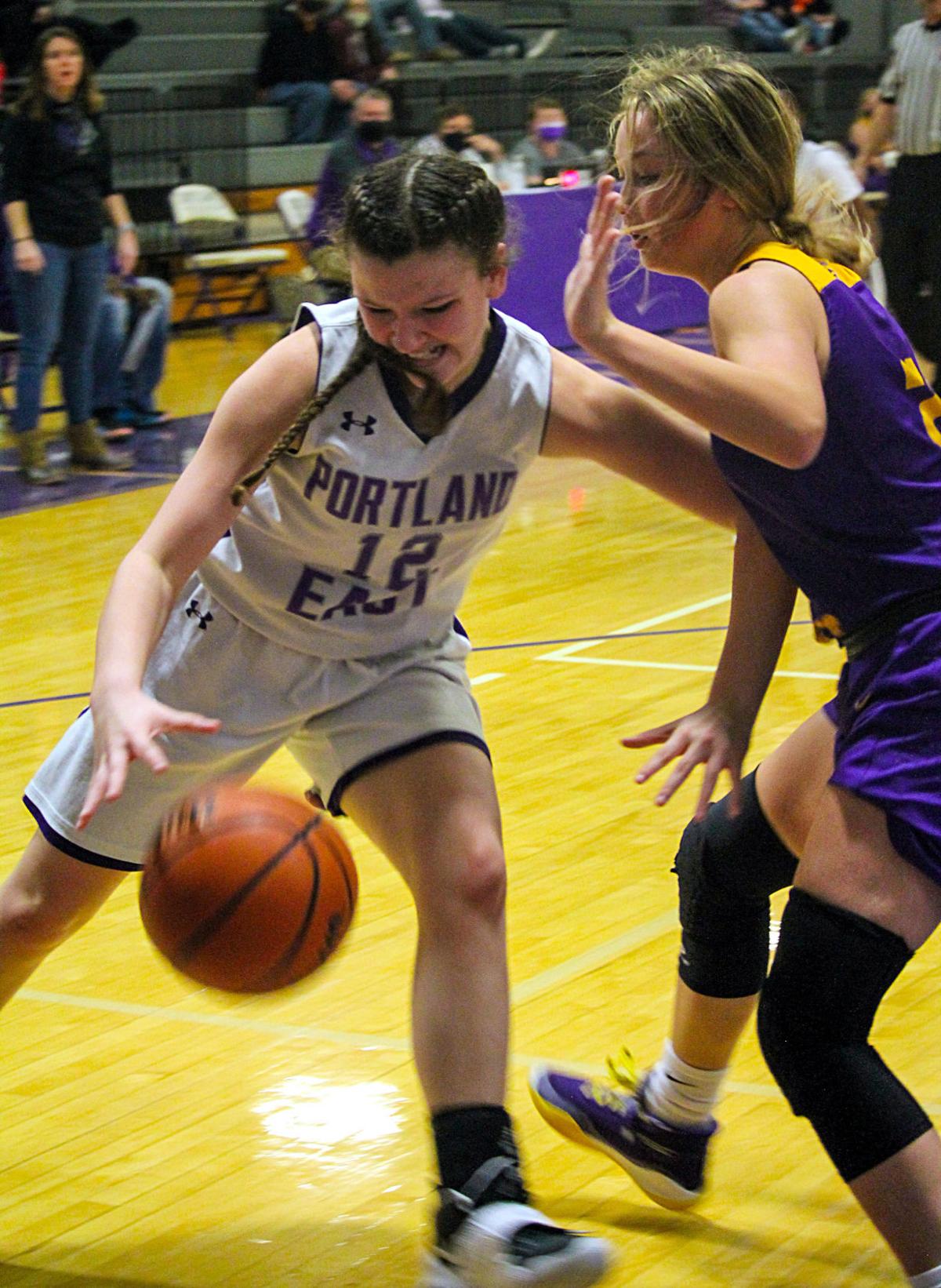 The Portland East Middle School girls basketball finished up the regular season by splitting a pair of games last week, including a 36-23 win over Hawkins last Wednesday evening.

With the win, the Lady Panthers wrapped up the No. 3 seed in this week’s AA county tournament.

“We were able to get a few practices with the entire team under our belt, and it showed tonight,” Portland East head coach Sloane Gilliland said. “We had the stronger team tonight.”

“We’ve been telling Ke’Miyah for two months to shoot the basketball more,” Gilliland said. “Tonight, she made four 3-pointers, including two in a row.”

Portland East led 12-6 in the first quarter as Kelsey tallied five points — including a 3-pointer — while Totten chipped in with four. Kelsey popped in back-to-back shots from the three-point stripe as the Panther girls extended their advantage to 14 points, 24-10, by halftime.

The Lady Panthers made just a trio of field goals in the third quarter while limiting the Commando girls to two free throws.

Hawkins got untracked in the fourth period with 11 points but couldn’t overcome the Lady Panther lead as shots by Kelsey, Montandon and Totten put the game away.

Kira Smallwood added to the Portland East scoring with two points, and Lily Dunbar made one free throw.

The Lady Panthers trailed 22-9 entering the final stanza but rallied by outscoring the Lady Jackets 12-5 to close the gap to six points with two minutes to play.

“We ran out of time and steam,” Gilliland said. “We had everyone back and felt pretty strong and confident.”

Portland East trailed 10-5 at intermission, and Gilliland had a message for the girls in the locker room.

“We told the girls to come out tougher,” Gilliland said. “We were not tough in the first half, especially on offense. These girls are so coachable, and they did everything to the greatest ability to win.

“Satterfield Middle was very aggressive and had a deep bench. Their coach told me he is losing 12 players this year.”

Totten led the charge with 14 points, while Montandon netted four and Kelsey three.

“KeMiyah, Ava, and Lily all do a good job for us,” Gilliland said. “They are cool and calm for us.”

Totten supplied Portland East’s offense with all of her team’s five points in the first half. Totten and Montandon each netted two points in the third quarter as the Panther girls trailed 22-9.

Behind Totten’s seven points over the final six minutes of play, the Purple made a comeback, with Kelsey firing in a three-point bucket in the rally and Montandon adding basket.

The Panthers earned the top seed in this week’s AA county tournament by winning over Hawkins, 39-17, last Wednesday.

“We were without two starters, so we had eight players tonight,” Portland East head coach Mike Hollingsworth said. “We hadn’t practiced over the holidays, so it was good to be on the basketball court.”

Eighth-grader Carson Dismang led the way with 28 points, with Skylar Hicks scoring five and Jay Guthrie and Zach Langford following with three each.

“Carson dominated the inside tonight,” Hollingsworth said. “We rebounded well, and the guards took care of the basketball.

“Hawkins is a good team.”

Dismang and the Panthers got off to a fast start by building a 12-4 lead. Dismang scored six points, while Hicks had three and Guthrie dropped in a 3-pointer to pace the Panthers.

Dismang matched his first-quarter total with six in the second frame as Portland East continued to hold the lead and took a 19-8 advantage into the locker room at intermission.

Behind a 10-point effort from Dismang, the Panthers put the game away in the third quarter with a 14-2 outburst, creating a 33-10 margin. Hicks and Langford each contributed a field goal in the period.

The Panthers maintained their double-digit lead in the fourth quarter as Dismang recorded all six points for Portland East to create the final margin of victory.

The Commandos had six players reach the scoring column, with Justin Zuger leading the way with five points.

Portland East had 16 made field goals, compared to six for Hawkins.

On Thursday evening, the Panthers won over Satterfield Middle, 31-19.

“I thought it would be a tougher game,” Hollingsworth said. “In the first half, we missed easy shots and free throws (missing all eight of their attempts) and felt like we should have been up by 20 instead of 13.

“We did rebound and played defense well. The defense won the game for us tonight.”

Portland East jumped out to a 11-4, first-quarter advantage as Cameron Agee popped in a 3-pointer. Dismang, Guthrie, Hicks and Ethan Vance also recorded a field goal.

Three Panther players reached the scoring column in the second as Dismang, Guthrie and Vance connected from the field for a 17-4 advantage at halftime.

The Panthers outscored the Jackets by a 9-8 margin in the third quarter as Dismang and Zach Langford each dropped in four points, and Colin Dowsett tossed in a foul shot for a 26-12 edge.

Satterfield Middle cut into the lead in the fourth period but couldn’t rally as the Panthers closed out the regular season with a victory.

Seven players scored for Portland East, led by Dismang’s eight points. Guthrie tallied seven. Agee dropped in five. Langford and Vance each chipped in with four. Hicks had two, and Dowsett contributed one.

“I told the kids to keep playing hard, play defense, and take care of the basketball,” Hollingsworth said. “We made some bad passes, and my message to the kids at halftime was to end the game in the third quarter. I told the kids that this game doesn’t matter. It should help us get better and prepare for the tournament. The tournament is a new season.”

Portland East is hosting the AA county tournament this week.