Skip to main content
You are the owner of this article.
Edit Article Add New Article
You have permission to edit this article.
Edit
Home
News
Sports
Obituaries
Eedition
Classifieds
Legal Notices
Subscription Services
1 of 6 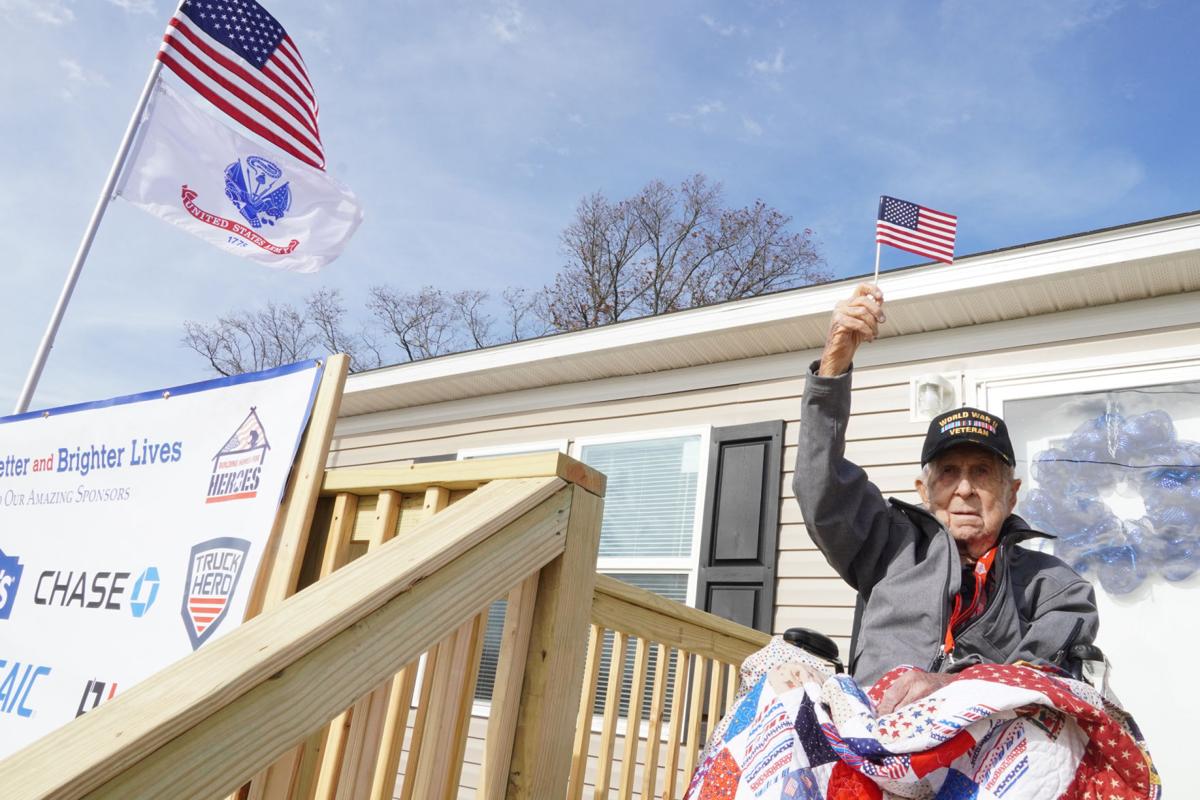 Bill Bradley sits on the porch of his new home at a Nov. 20 celebration. The Portland native and World War II veteran’s home burned down in May and a nonprofit group, Building Homes For Heroes, helped Bradley replace his home. 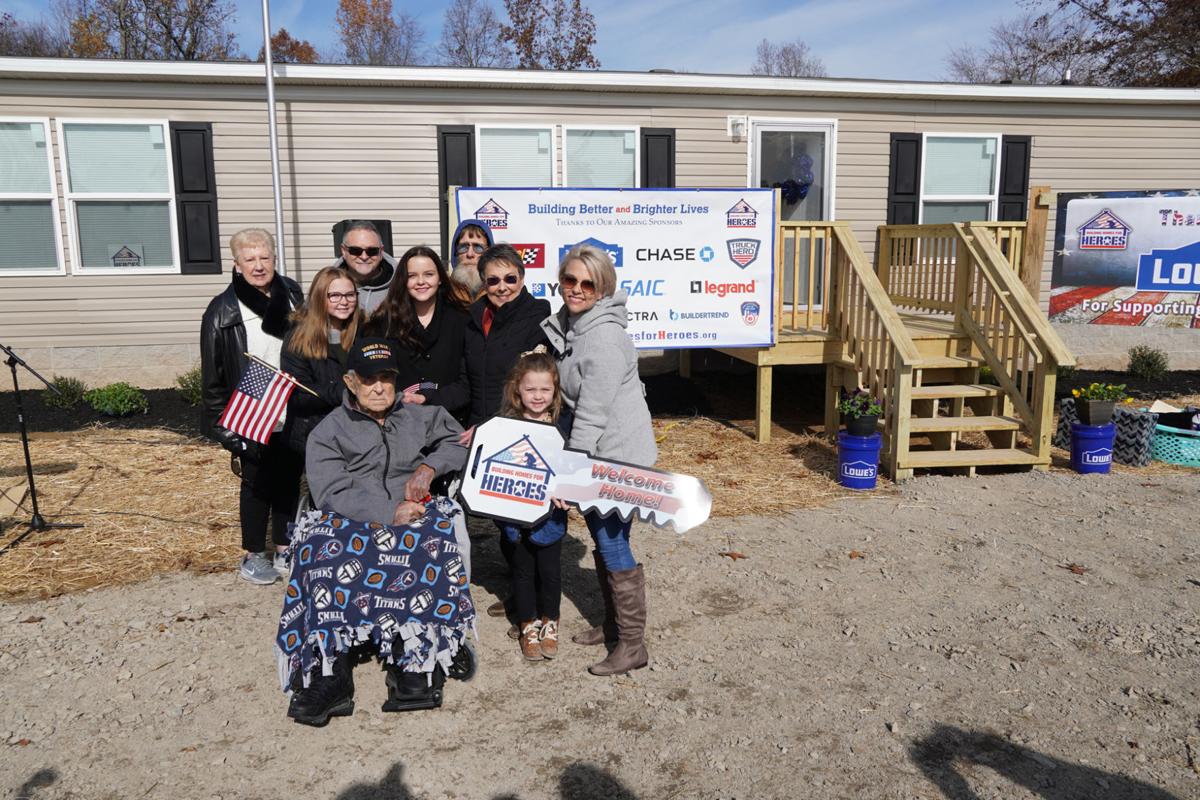 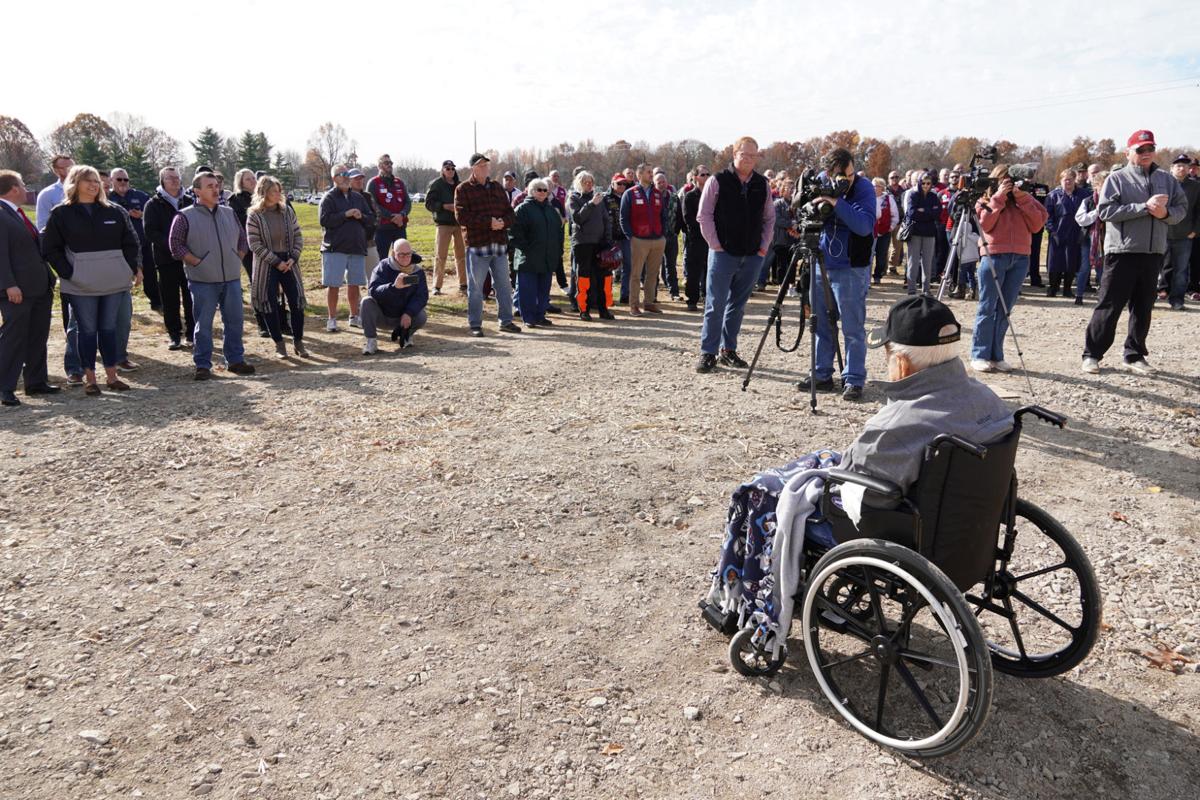 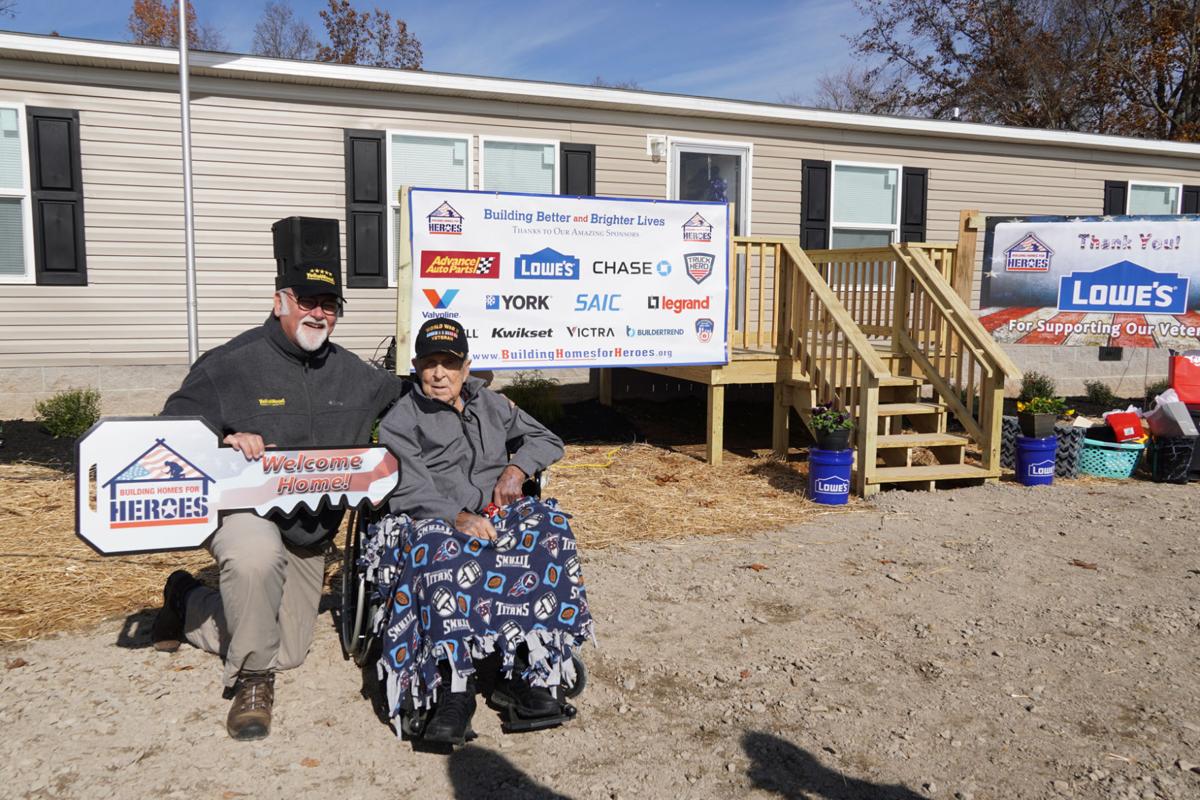 One of the contractors who helped deliver Bill Bradley’s new home poses with the Portland native. 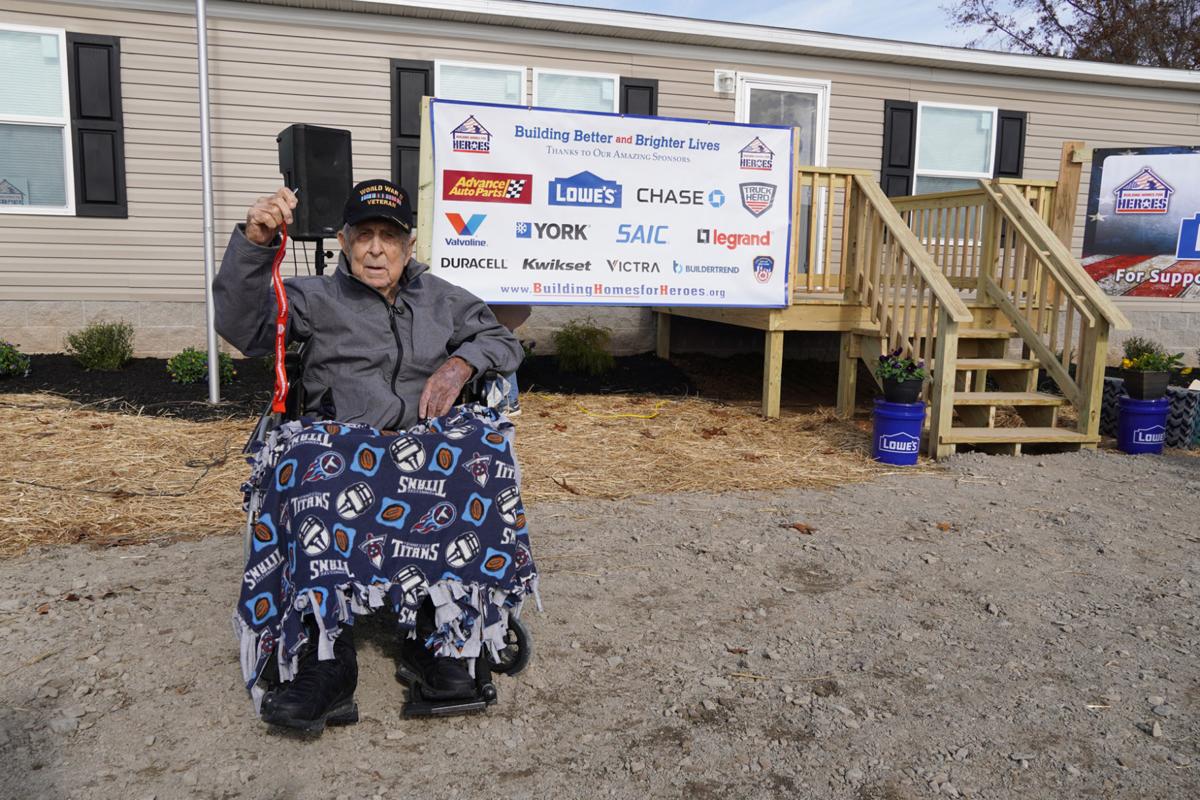 Bill Bradley shows off the key to his new home. 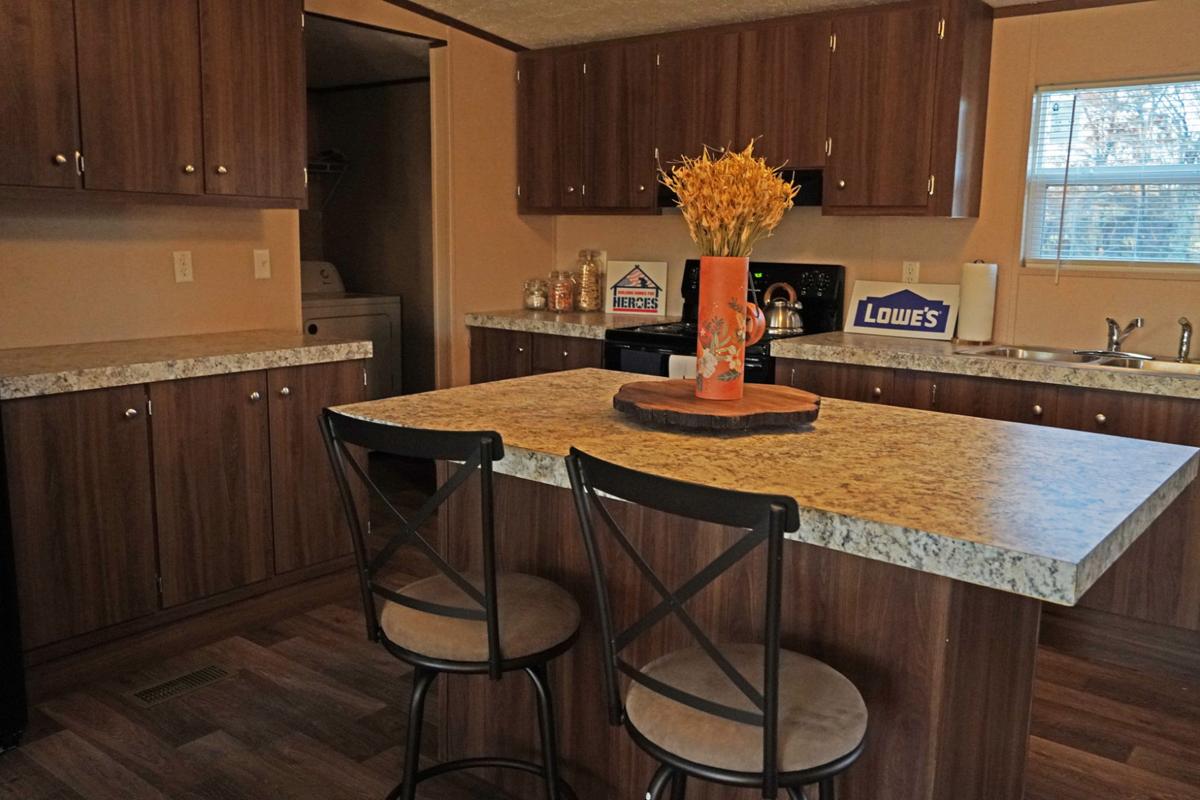 The interior of Bradley’s new home is partially shown here.

Bill Bradley sits on the porch of his new home at a Nov. 20 celebration. The Portland native and World War II veteran’s home burned down in May and a nonprofit group, Building Homes For Heroes, helped Bradley replace his home.

One of the contractors who helped deliver Bill Bradley’s new home poses with the Portland native.

Bill Bradley shows off the key to his new home.

The interior of Bradley’s new home is partially shown here.

Continuing support from the Portland community and beyond has helped a World War II veteran get back home, just in time for the Thanksgiving holiday.

Bill Bradley, 97, lost his home to an electrical fire in May of this year and also lost all of his memorabilia from his wartime service, which included landing at Normandy’s Omaha Beach and later fighting in the Battle of the Bulge.

While staying with his granddaughter, NewsChannel5 got hold of the story and a Middle Tennessee veteran helped Bradley replace his uniform, his service record and various medals that included the Bronze Star.

Bradley’s ultimate goal was to be able to rebuild his home, but lacking home insurance meant funds would be tight. While a GoFundMe campaign had been started to raise money to assist, things still looked bleak.

But the attention Bradley’s story garnered from media coverage, including a story in The Leader, caught the eye of people in a position to help, including a vice president of Lowe’s Home Improvement.

Lowe’s got in touch with a nonprofit organization called Building Homes For Heroes, which is dedicated to helping injured veterans, and things began to snowball from there.

“That got to Lowe’s, who is one of our major financial sponsors. Since 2019, they’ve donated over $2.5 million to us,” said David Weingrad, senior communications manager for Building Homes for Heroes. “They wanted to help and partnered with us.”

Building Homes For Heroes was founded in 2006 and has built or modified roughly 300 homes for veterans injured after 9/11. The nonprofit actually changed its mission statement to cover veterans of other wars in order to be able to provide service to Bradley.

“Our founder, Andy Pujol, was in search and rescue helping clear debris after 9/11,” Weingrad said. “We’ve been so successful that we’ve been able to get national partnerships such as Chase Bank and Advance Auto Parts, a lot of great companies that have supported us.

“We had been talking about expanding to cover veterans of other wars and it happened to coincide with Lowe’s bringing this to our attention. We didn’t hesitate, Andy said, ‘Yes, we’re in.’ ”

Bradley’s new home is the first the nonprofit has put together for a pre-9/11 veteran.

Weingrad said within a few weeks of the May fire, his group had met with Lowe’s and other local contractors to see what could be done.

“We wanted to get him in his home as fast as possible, so he could be where he wants to be. He’s 97,” he said of Bradley.

Instead of building a new home from scratch, which Weingrad said could take as long as a year, the decision was made to obtain a modular home so to shorten the process.

Building Homes For Heroes reached out to multiple companies but ran into problems with supply chains. Ultimately, a company called Kentucky Dream Homes provided a two-bedroom, two-bathroom modular home that was placed on Bradley’s property. Local volunteers and contractors also assisted with construction and Lowe’s paid for the entire home. Weingard declined to comment on the cost of Bradley’s new home, citing company policy.

Installation took longer than expected, but Bradley was able to move into his new home six months to the day after the fire.

“It’s not just getting the home delivered, it’s putting it on a solid foundation, getting septic and electrical wiring,” Weingrad said. “We were aiming for around Sept.11 but ultimately said, ‘We’re getting him in his home before Thanksgiving.’ ”

Dozens of cars lined the street and people came out en masse to show their appreciation for Bradley. NewsChannel5 reporter Chris Davis, who originally reported on Bradley’s story, was also on hand.

“I didn’t realize this many people knew about me,” Bradley told Channel 5. “I’m amazed by it and honored too.”

“This was something we knew would be a real privilege, to help a member of the Greatest Generation,” Weingrad said. “The fact that we were able to do something for one of our heroes is something we’ll never forget and it will be part of our legacies.”

For more information on Building Homes For Heroes, visit buildinghomesforheroes.org.