You have permission to edit this article.
Edit
Home
News
Sports
Obituaries
1 of 5 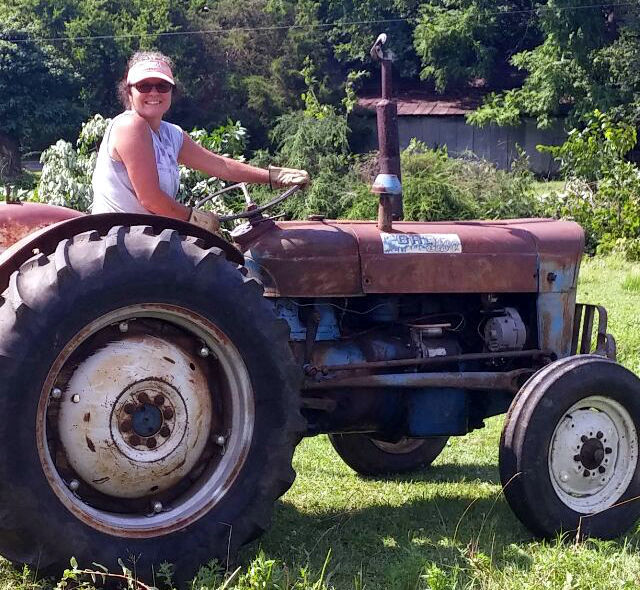 Ginger Lesemann is retiring after a 32-year teaching career at Portland High School. 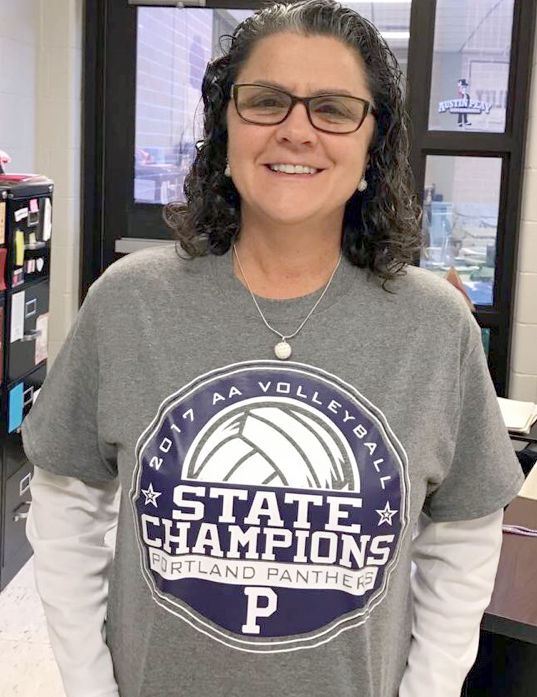 Submitted Ginger Lesemann restarted the Portland High School volleyball program in 1989, and she has coached in some capacity in every season except one since that time. 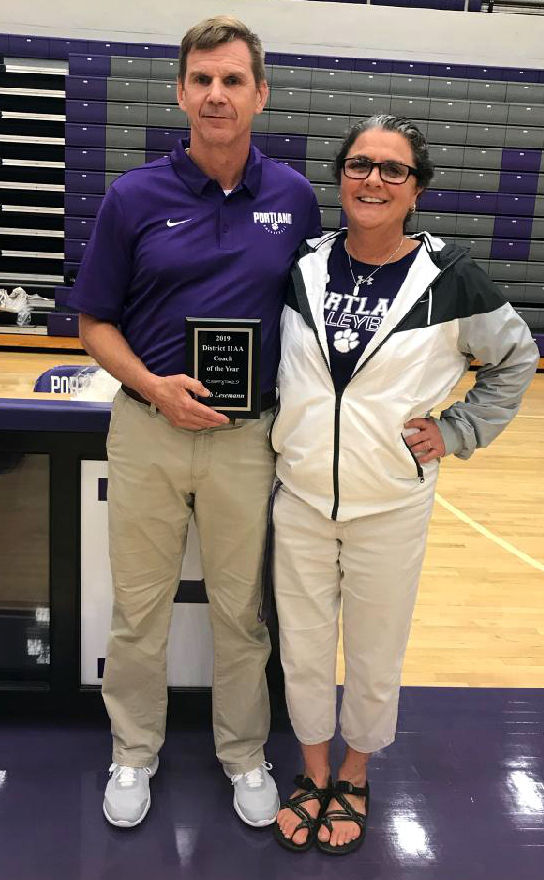 Submitted Ginger Lesemann (at right) served as the assistant coach to her husband, Rob Lesemann, for the past six seasons.

Ginger Lesemann is retiring after a 32-year teaching career at Portland High School.

Submitted Ginger Lesemann restarted the Portland High School volleyball program in 1989, and she has coached in some capacity in every season except one since that time.

Submitted Ginger Lesemann (at right) served as the assistant coach to her husband, Rob Lesemann, for the past six seasons.

Ginger Lesemann never wanted to be anywhere else.

“I would never be anywhere else,” Lesemann — a 1981 Portland High graduate — said. “I never wanted to be anywhere else. You don’t know what a school is like until you’re in it. A testament to how good our school is and how good it has been for a long time is that we probably have 60% or more of the faculty as Portland High School graduates. I don’t know if other schools can say that.

“The people who came through love the people, loved their hometown, loved their school. They didn’t want to be anywhere else. I loved it going through high school. I don’t know that I’ve given any more to the school than I’ve gotten.”

Lesemann isn’t going to another school … but for the first time in 32 years, she won’t be at Portland High School each day. Leseman retired from teaching as of July 20.

“It’s not that I have great, big, glorious plans after I retire,” Lesemann said. “But you have the option to do things. You see people doing other things, and you say, ‘I might like to do that.’ When you retire, you have the option of doing those things.”

Lesemann actually planned to teach through this school year and retire following the 2020-21 campaign.

“It was all based around my kids getting out of college,” Lesemann said. “My youngest daughter (Sarah) was supposed to graduate in May. I wanted to have a year of teaching with no college bills, but she graduated a year early. So, this past year was actually my year to be without any college bills.”

The long-time math instructor acknowledged that there were other factors involved as well.

“I thought I’d always stay until I was 58 (years old),” Lesemann said. “That would be next March. We got out in March (due to the COVID-19 outbreak), and we didn’t go back. We had to do our online stuff, but that gives you a little taste of that (retirement).

“We had to go through computer training to do Google Classroom. My technology skills … well, it’s kind of like me and swimming. I can save myself, but I can’t save anybody else. I can do my job, but to do something online totally, I’m not sure I would have been good at that ... but I could have learned that. I’ve been teaching for 32 years. When we had to do that virutal learning in the spring and comment on your kids’ work, that stresses me out. This was just the right time. If we had been back and none of this (modifications due the coronavirus pandemic) had come along, then May of 2021 would have been the right time.”

Lesemann’s husband, Rob, retired from Nissan in May of 2019.

“If Rob hadn’t retired before and had been at work every day, I might not have been as anxious to retire,” Lesemann said. “And our kids are gone. We’re empty-nesters.

“We actually like each other. We got married in 1989, and we still like each other and enjoy doing things together. We’re together almost 24-7 (24 hours per day, seven days per week), and we like that. We live on a farm. We’ll be out cleaning fence rows. I love it.”

Portland High principal David Woods was aware of the fact that Lesemann was planning to retire following the 2020-21 school year.

“He knew this was my last year,” Lesemann said. “In reality, I just kind of dropped the ball (in reaching the decision so close to the start of school). I don’t feel like I’m that type of person. I was putting people in position to handle something that I dropped in their lap.

“I don’t want to be a burden on somebody else. That’s the hardest part for me.”

She was admittedly reluctant to inform Woods of her decision.

“I texted Mr. Woods on Friday and asked him if he was going to be in school that day, but he wasn’t,” Lesemann said. “Then, Monday came, and I went up front (to the office). Mrs. (assistant principal Kim) Meadows was up there, and I asked if Mr. Woods was going to be there that day. She said, ‘I think he’s on vacation.’

“It’s so late in the year, so I texted him and asked if I could call him. He called me, and he was shocked. I told him, ‘I didn’t want to disappoint you.’ I told him that I knew that I was putting him in a bind as far as finding somebody to cover my classes. He said, ‘Yeah, it’s going to be hard.’ ”

Lesemann has found fulfillment in the classroom.

“You have kids that you teach that later on come back and tell you (that you helped them),” Lesemann said. “I had Scott Fussell. I had him in probably ninth grade. He was one of the first kids that told me that he finally understood math in my class. Then, I had another teacher who e-mailed me and said, ‘Your class was the first class where I understood math.’ I had another who said, ‘I was never intimidated to ask you a question.’ That makes you feel good too.”

In addition to her classroom responsibilities, Lesemann has been involved in athletics throughout her tenure at the school.

“I’ve only been here as principal for eight years,” Woods said. “When I was at Beech (High School), I would umpire high-school volleyball as a side gig, and I would see her.

“She means everything. You can replace the position, but you can’t replace the person. Ginger is one of those dying breeds who was born and raised here. If we cut her wrist, you wouldn’t see blood … you’d see purple. She’s seen the best of times in athletics, and she’s seen the worst of times. To her, it was all the same. She loved the football team when they were 15-0 and won a state title. She loved the football team when they didn’t win a game. Her and Rob single-handedly built this volleyball program from a starter program to reaching the sectional (round) and losing to (Class AAA perennial power) Brentwood and then to winning two (Class) 2A state titles. It’s her consistency, thoroughness and love of the school … you can’t find that anymore.”

Leseman started her teaching career in the fall of 1987, and two years later, she — along with assistant coach Robin Venable — restarted the volleyball program.

The program experienced considerable success, reaching the Class A-AA state semifinals in 1997 and advancing to the sectional round numerous times.

However, with Lesemann serving as the assistant coach for her husband since the 2014 season, the program reached new heights by winning back-to-back Class AA state titles in 2017 and 2018 and then finished as the state runner-up to Nolensville last fall. The Lady Panthers have compiled 135 wins over the past three seasons.

“Me just being a teacher wasn’t enough for me,” Lesemann — who played softball and was a basketball manager as a Portland High student — said. “I don’t mean ‘just being a teacher’ in bad terms. I just wanted some more responsibility. I wanted to do something else in my school. I wanted to do more. That’s when we started coaching volleyball. Did I ever think when my husband and I got married that we would end up coaching all these years … no.”

However, Ginger will remain a part of the school in one capacity as the Lesemanns will continue to coach the volleyball program.

“I didn’t want Rob to be left there by himself … not that he couldn’t handle it,” Lesemann said.

In addition, she has served as the school’s athletic director (AD) for the past 11 years.

However, those athletic-director duties and the time commitment that came along with those responsibilities have caused Lesemann to look forward to having more freedom in her retirement.

“There’s been many times I’ve sat at school and said, ‘I’m ready to go somewhere,’ ” Lesemann said. “Responsibilities get heavy when you’re an AD and a teacher. You go to every football game. You go to every basketball game, and you try to make the other sports as much as you can. You try to go see those kids doing their things. Time-wise, I spend as much time at those events as doing paperwork.

Justin Martin and Joann Keith will serve as the athletic directors going forward, and Lesemann will help them to transition into handling those responsibilities during the current semester. Martin assisted Lesemann in that athletic-director role this past school year.

“You can’t fill Ginger Lesemann’s shoes, but I have some good people who I trust,” Woods said. “It’ll just be different.”

Most of all, Lesemann will miss the daily interaction and relationships that she’s enjoyed during her teaching career.

“The people at school … I’m leaving some really good friends at the high school,” Lesemann said. “You have players who you get really close to. Then, you have some who you’re not as close to. I’ve had five or six players over the course of my career to where we’re just close to each other. They send me cards in the mail when they have babies.

“Portland High School is the only place I wanted to be. I didn’t want to teach anywhere else. That was my home.”