You are the owner of this article.
Edit Article Add New Article
Home
News
Sports
Obituaries
1 of 2 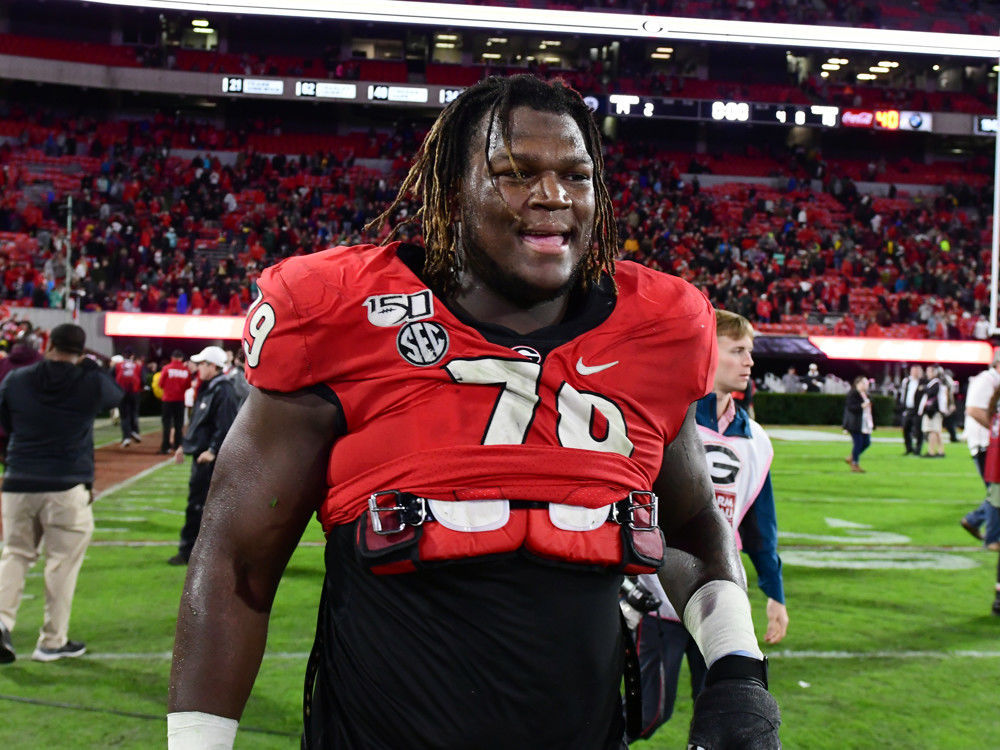 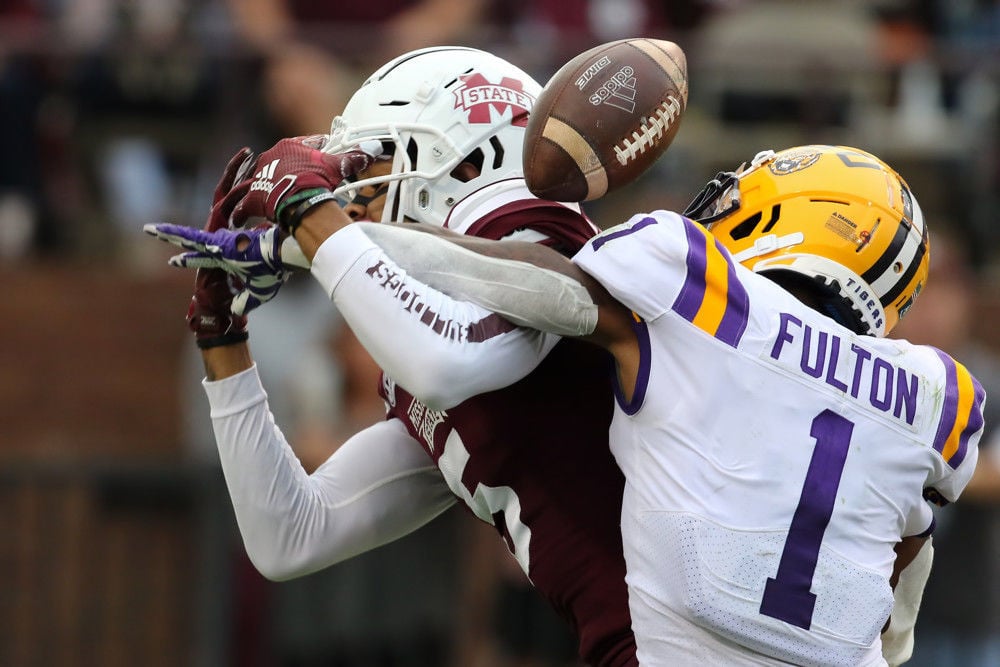 LSU Tigers cornerback Kristian Fulton (1) was chosen in the second round of the NFL Draft by the Tennessee Titans on Friday night.

LSU Tigers cornerback Kristian Fulton (1) was chosen in the second round of the NFL Draft by the Tennessee Titans on Friday night.

The Tennessee Titans addressed several needs in this past weekend’s NFL Draft, adding both players who should contribute right away and a few developmental projects.

This year’s draft was different as it was conducted virtually with all 32 teams general manager, coaches and staffs separated due to the Covid-19 pandemic and Commissioner Roger Goodell orchestrating the proceedings from his home.

In the first round, the Titans selected offensive tackle Isaiah Wilson of Georgia with their first-round pick, No. 29 overall, Thursday night in the NFL Draft.

Wilson, at 6-6, 350 pounds, should compete right away with veteran Dennis Kelly to be the Titans’ starting right tackle, replacing Jack Conklin, a former first-round pick, who signed as a free agent with the Cleveland Browns in March.

Wilson is rated as a strong run blocker, something that should fit what the Titans want to do with Derrick Henry rushing the football.

“I’m sure I’m going to learn a lot of great things from Derrick Henry about run blocking, about where he expects holes to be from a back that’s been in the league for years,” Wilson said. “(Ryan) Tannehill can definitely teach me things about protection and everything of that nature. I’m definitely planning on learning from those guys and bettering my game with those guys, and polishing up everything I do and start to be the best player I can for the team.”

The Titans are excited about what Wilson can bring to the running game with his size and demeanor as a blocker.

“I think the best part of my game right now is that I am physical and I enjoy beating people up. I enjoy running the ball,” Wilson said. “I enjoy trying to essentially break another man’s will. That is what I enjoy about the game. I would say that’s definitely my strong suit, and the things I want to work on, just technique in general. Pad level, hand usage, all sorts of technique things I want to polish up and get as much coaching as I possibly can to work on those things and be the best I can for the team.”

The fact that Wilson played in a run-based offense at Georgia should translate well into part of the Titans scheme.

“There are certainly a lot of elements to the game that they were doing at Georgia that will translate here,” Titans coach Mike Vrabel said.

If he wins the right tackle job, it will complete the makeover on that side of the line, as Nate Davis was drafted in the third round in 2019 and wound up as the starting right guard for the Titans.

“I think anytime you can add youth, and strength, and power, and length to the offensive line position, that’s good,” Titans GM Jon Robinson said. “We’ll continue to try to do that. It’s a good mix with that position group. Coach Vrabel talks about it a lot, that he really likes going in that meeting room with those guys, and we feel like Isaiah (Wilson) will fit in with that room really, really well, learn from those guys. Taylor (Lewan), and Dennis (Kelly), and Rodger (Saffold) and certainly Ben Jones, and help get him up to speed as quick as possible.”

After passing on a cornerback in round one, Robinson’s gamble paid off as he selected LSU’s Kristian Fulton in the second round with the 61st overall choice.

“Fulton was a player that we had pretty highly rated, and we were fortunate that he was still there when we were on the clock. There were a couple of guys we were looking at at that position as the second round kind of ticked down, but Fulton was a really good player that we’re excited to have,” Robinson said.

He likely will join veteran Malcolm Butler and fourth-year pro Adoree’ Jackson as the Titans top three cornerbacks, as the team spends a lot of snaps in the nickel package. Fulton played in the slot during his freshman season at LSU and in certain packages for the Titans during their national championship season in 2019.

“He did it as a freshman, and depending upon the formation, you could see him play it there a little bit this year. He’s got good quickness. He’s got good awareness and instincts in there. He’s got some patience. He’s got some toughness to him. He will tackle, which is important for that position,” Robinson said.

Fulton said playing in the slot was one of the first things the Titans asked him about when they interviewed him at the NFL Combine.

“That was one of the first questions they asked me was, ‘Was I comfortable playing inside and how did I feel about playing inside?” Fulton said. “I told them my freshman year at LSU, that was my main position. …I’m definitely excited to play inside if that’s where they want to put me at.”

Fulton is likely the replacement for Logan Ryan, who is a free agent after three years in Tennessee and still remains on the open market after a strong year with the Titans in 2019.

Fulton does not come without baggage, however, as he received a two-year suspension while at LSU for trying to fake a drug test. That suspension was later reduced to one season.

Fulton said he learned from the setback.

“They wanted my perspective on the situation, and I was comfortable explaining that situation to them. I was young and I made a mistake and I wanted them to understand that I learned from that mistake,” Fulton said. “I learned to hold myself accountable.”

Robinson said the Titans did their homework to make sure there were no major issues with Fulton.

“It’s no different than other player that had something in college. You talk to the player about it and understand the situation,” Robinson said. “I talked to sources at LSU who spoke highly of the player. I know a guy who is on the staff at LSU that coached him in high school who spoke highly of his character. He sent me a text tonight that said, ‘You’ve got a great player, but you’ve got an even better person.’ I trust our scouts to get all the information and background on these players when we

The Titans addressed another need in the third round of the NFL Draft Friday night, adding Appalachian State running back Darrynton Evans as a complement to Derrick Henry.

Evans, 5-10, 203, is a speed back with a 40 time of 4.41 in the 40-yard dash. He is one of 10 players the Titans managed to bring in in for a visit before that was shut down due to the coronavirus pandemic. He figures to become Henry’s sidekick, replacing Dion Lewis in that role and being able to contribute in the passing game on third downs.

“I would say you could label that as a strength,” Evans said of his pass-receiving ability. “I actually signed with Appalachian State as an athlete, knowing that I was coming in and just trying to get on the field. That’s something the coach preached when he was recruiting me. He didn’t care what position I played, whether it was receiver or running back. He just wanted to get me on the field.”

Evans was the Sun Belt Conference Player of the Year for 2019 after rushing for 1,480 yards and 18 touchdowns on 255 carries last season. He also caught 21 passes for 198 yards and can fill the third-down receiving back role vacated when the Titans released veteran Lewis after the season.

Titans coach Mike Vrabel spoke highly of Evans’ character and his talents in meeting with him. Vrabel said the Titans will load Evans with has much as he can handle.

“I think right now you’re looking at a guy that we really like from a character standpoint and a skill set. What his role will be and how we will use him will be defined by the player and how much he can handle,” Vrabel said. “This was a guy that we brought in, and we met with, and everybody in the building really liked what he was able to do in conversation, on the board in the learning process, and then obviously watching the film. We thought his skill set translated into some things like using him out the backfield and being a change of pace and being a one-cut runner. We’ll see what he can do and give him as much as he can handle.”

DT chosen in round fiveTennessee addressed a need at defensive tackle with their first pick on the third day of the draft, taking North Carolina State defensive tackle Larrell Murchison at No. 174 overall.

The Titans have needed players on the defensive line numbers-wise after trading Jurrell Casey to the Denver Broncos and losing Austin Johnson as a free agent to the New York Giants.

Murchison, 6-2, 297, spent two years with the Wolfpack after initially playing junior college football. He started 13 games for North Carolina State in 2018 with 34 tackles, including four sacks and eight tackles for loss. He also had an interception and two pass breakups.

Murchison, who initially played in junior college before going to NC State, is a versatile player, and said that the Titans liked that about him during their interview session.

“I played all along the defensive front, from the five-technique to the zero-technique, and they liked that part of my game that I was versatile and able to help anywhere I can,” Murchison said.

This past season, Murchison led the team with 12 tackles for loss and had seven sacks among his 48 total tackles. He also had two pass breakups in 12 starts.

Murchison actually played fullback in high school before being converted to the defensive line at the junior college level.

“Being able to be athletic and being able to move around, I feel like that’s going to be helpful,” Murchison said.

The Tennessee Titans addressed the backup quarterback position, selecting Hawaii’s Cole McDonald with the first of their three seventh-round picks, No. 224 overall, on Saturday.

McDonald will come in and compete with Logan Woodside, who spent last year on practice squad and practice squad injured reserve, for the backup spot behind starter Ryan Tannehill.

McDonald also has some mobility and could be a developmental project for the Titans at quarterback.

Tennessee traded its second of the three picks (No. 237 overall) to the Kansas City Chiefs for a sixth-round choice in 2021.

With their final pick in the seventh round, the Titans added more defense, taking Marshall safety Chris Jackson with the 243rd overall choice. Jackson can also play cornerback, nickelback and should figure on special teams as well.