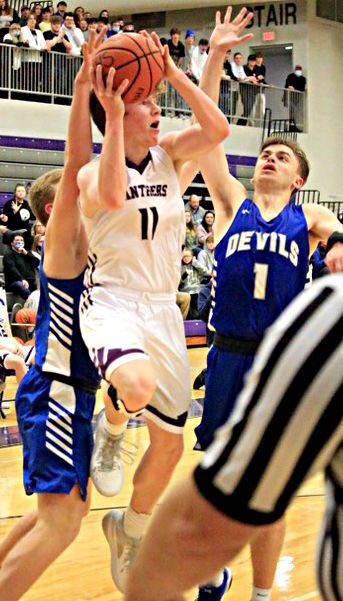 Portland High’s Caeson Utley elevates for a shot in front of two White House defenders. Utley made a free throw with less than a second remaining to give his squad a one-point win over rival White House last Wednesday evening.

Portland High’s Caeson Utley elevates for a shot in front of two White House defenders. Utley made a free throw with less than a second remaining to give his squad a one-point win over rival White House last Wednesday evening.

Portland High School junior Caeson Utley made one of two free throws with eighth tenths of a second left in the game to give the Panthers a thrilling 47-46 win over visiting White House last Wednesday night.

The game was moved up a day due to the possibility of inclement weather on Thursday.

Utley was fouled with less than a second remaining and the contest knotted up at 46-46.

Utley’s first attempt bounced three times on the rim before falling off. Then, his second attempt went in for a one-point edge.

White House threw the basketball downcourt to Quad Lucas, whose last-gasp field-goal try was no good.

“We were trying to get to the rim with the clock running, and the kid (Utley) gets whacked on the head,” Portland head coach Darryl Travis said. “To lose the momentum and then make some big plays down the stretch, that is huge for us.”

Portland led 22-6 at the end of the first quarter, extended that to 19 points in the second and held a 13-point advantage at halftime.

“We looked good in the first half,” Travis said. “Then, Duncan (Smallwood) picks up a cheap foul that hurt us, and Caeson got winded. Freddy (Paxton) and Duncan were in foul trouble. We were already short two players with Jalen (Pero) and Hunter (Hicks) out, so we didn’t have a lot of bench. But we held on and were still up at halftime.”

White House outscored the Panthers by a 16-6 margin in the third quarter to chip away at the double-digit advantage and trailed by three heading into the final eight minutes of action.

“We let White House jump on us in the third,” Travis said. “We got emotional and started doing other stuff.”

The Panthers made five field goals over the final 16 minutes of play after connecting on 11 of their attempts in the opening half.

Senior Dawson Kennedy topped the Panthers in scoring with 13 points, with Montaize Bradley reaching double figures with 10. Smallwood and Utley each tallied seven. Chase Runyon had six, and Cody Carlson and Braden Thornton contributed two each.

Lucas led the Blue Devils with 18.

Portland fell behind 4-0 before tying the score on shots by Runyon and Utley. Lucas snapped the tie, but the Panthers finished up the first quarter by erupting for 18 consecutive points. Bradley had seven of those. Smallwood fired in five points, including a three-point bucket, Runyon netted four as the Panthers led 22-6.

Caleb Dorris snapped the Blue Devils’ cold spell with a jump shot, but the Panthers scored seven consecutive points as Kennedy made a shot off the glass before Bradley drilled a 3-pointer. Then, Kennedy dropped in two free throws for a 29-10 lead at the 4:18 mark of the second stanza.

Zane Brown sparked the Blue Devils with a trio of three-point field goals on consecutive trips downcourt to cut the deficit to 10, 29-19.

Kennedy popped in a shot from long range before Dorris scored again for White House. Then, Kennedy finished up the scoring with two charity tosses as Portland led 34-21 at the halftime break.

White House took advantage of a dry spell by the Panthers in the third quarter in closing the gap from 13 points to four.

Quad Lucas worked inside for five points, and Amarion Lucas and Ethan Droz each tallied a field goal to create a 34-30 margin at the 3:44 mark.

Kennedy scored inside for Portland, and the teams traded field goals, with the Blue Devils’ Nathan Bowman sinking a 3-pointer to trim the lead to three, 40-37, heading into the fourth period.

The Blue Devils regained the lead with three unanswered field goals to open the fourth quarter and held a 43-40 advantage.

Smallwood sank two foul shots before Lucas scored on a putback and added a single free throw for a 46-42 Blue Devil edge with three minutes remaining.

Kennedy and Utley made back-to-back baskets to tie the contest at 46 with 1:08 remaining.

Then, after a White House miss, the Panthers came down and gave the ball to Utley, who was fouled on an interior shot to set up the winning free throw.