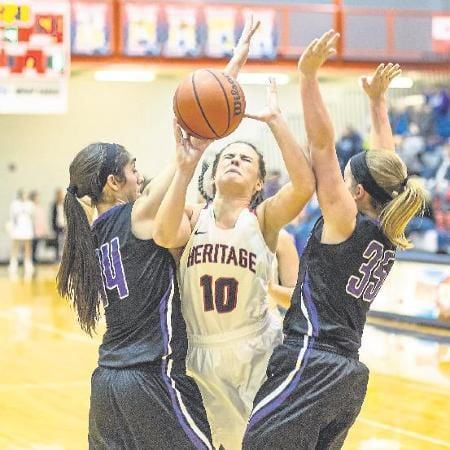 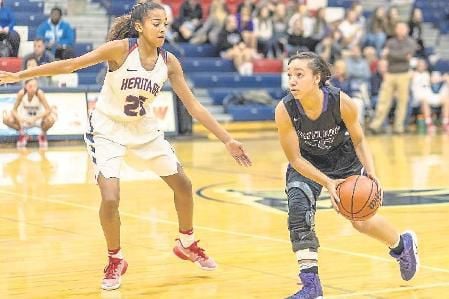 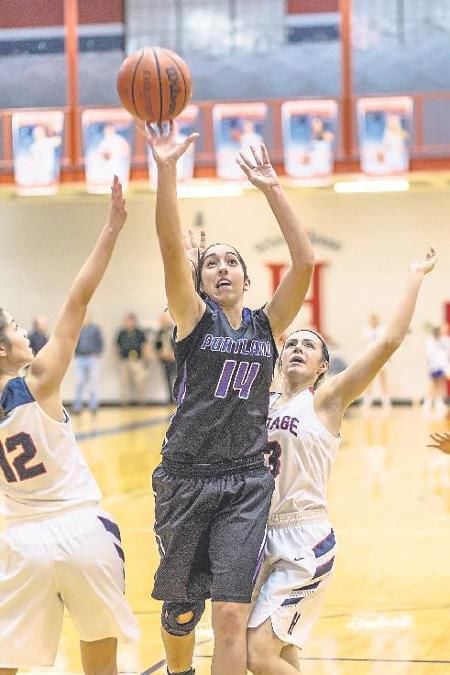 Mackenzie Trouten puts up a shot in the lane against the Lady Patriots. Leader photo/TOMMY ROUSE

Mackenzie Trouten puts up a shot in the lane against the Lady Patriots. Leader photo/TOMMY ROUSE

The Portland girls took control early and posted a 50-35 win over host White House Heritage last Tuesday evening. The Lady Panthers led from the opening tip-off and built an 11-point lead at intermission.

The Lady Patriots did rally in the fourth quarter after falling behind by 18 and trimmed the deficit to six with a minute left to play. Portland closed out the contest with seven straight points for the final margin of victory.

In the second half, the Purple made just four turnovers and outscored their hosts 27-23.

“This was the first game we hit on all cylinders,” Cravens remarked. “Offensively, we took better shots and knocked them down.”

Mackenzie Trouten paced the Lady Panthers with 16 points while Demaria Bell and Rachel Jennings followed with 14 and 11. Haley Dickens netted five and Mac Craddock had four.

The Lady Panthers led early on shots by Jennings and Trouten. A Jennings floater increased the spread to 6-2. Trouten made back-to-back baskets and Bell worked through the defense for two and a 12-4 edge.

Alex McFarlin scored for the Lady Patriots but a 3-pointer by Dickens expanded the Purple lead to 15-6.

Bell netted six of the Lady Panthers eight points in the second period and Trouten dropped in a pair of foul shots. Two of Bell’s buckets were offensive putbacks and the other was a lay-up. Portland ked at the break 23-12.

The Lady Panthers opened up a 19-point advantage in the third quarter on a 9-1 run. Trouten’s 3-pointer started the offensive run with Jennings and Dickens each contributing. Trouten scored three straight to close out the streak and a 32-13 spread.

The Lady patriots came back with consecutive shots but Craddock closed out the third quarter with a left-handed shot off a rebound and the Purple entered the final eight minutes leading 37-19.

White House Heritage made a run in the fourth period. The hosts scored the first eight points with Callie Roach canning a 3-pointer and McFarlin closing the run with two foul shots that closed the gap to 10, 37-27.

Jennings and Bell made back-to-back buckets but Roach scored eight of her teams next ten points that pulled the hosts to within six, 43-37 with a minute left to play. But the Lady Panthers withstood the challenge as Bell registered a basket, Trouten made a single foul shot, Jennings found the net for two and Craddock gave the Purple their final margin of victory with a pair at the charity stripe.