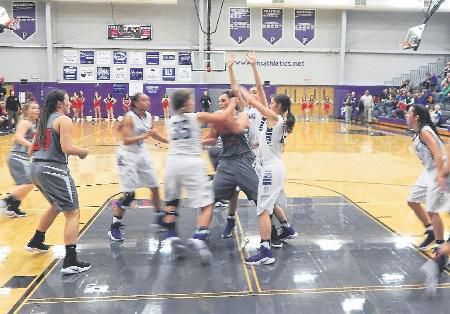 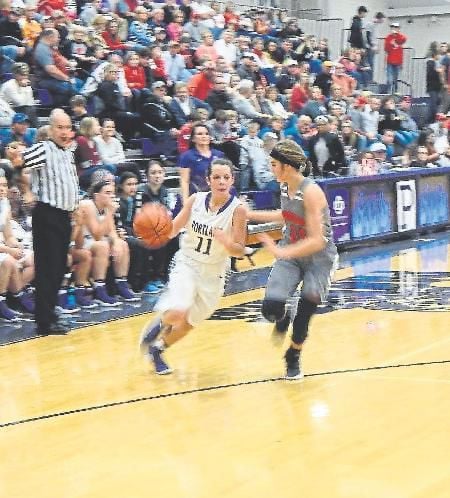 The visiting Westmoreland girls jumped out to an early 11-0 and went on to defeat the Lady Panthers 52-34 last Tuesday night. The Purple trailed by 20 after one quarter of play and faced a 19-point deficit at intermission.

Portland did cut the lead down to 14 late in the contest but couldn’t get any closer.

“We came out not ready to play and dug a hole for ourselves,” Lady Panther coach Miranda Cravens said. “We committed ten turnovers in the first quarter alone and our goal is not to make ten turnovers in a game.”

The Lady Eagles, behind a pair of 3-pointers by Darby Bowser and nine points from Karley Smith’s nine points, built a 23-3 first period advantage and extended that to 30-11 at halftime.

“Westmoreland hit a couple of 3’s and had good looks at the basket,” Cravens pointed out. “We didn’t rebound tonight. We are not used to making shots under pressure.

Trailing by 19 at halftime, Cravens had one message for her team in the lockerroom.

“I told the girls we could use the rest of the game to feel sorry for ourselves or come out and work on things to get better.”

Westmoreland increased their margin in the third quarter and went up by 27, 42-15. Portland’s Mac Craddock netted four straight points in the final minute before the Lady Eagles finished up the period with a basket and led 44-19.

The Lady Panthers behind Demaira Bell’s six points and freshman Sami Parker’s five, cut the lead to 14 late in the game. But the visitors closed out the scoring with four straight points to create the final margin of victory.

Bell paced the Purple with nine points and Parker netted eight. Craddock finished with six, Jennings and Leah Kendall had four apiece with Haley Dickens contributing two and Abbie Tomlinson rounded out the scoring with one.

Smith led all scorers with 15, Kaitlyn Norman had seven and Lexie McCormick scored seven for the Lady Eagles.